Acton residents digging out of muddy mess after flash flooding 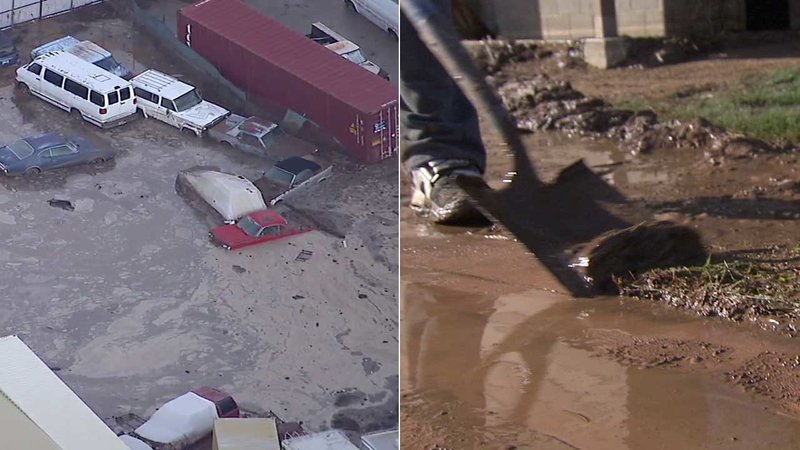 Acton residents digging out of muddy mess after flash flooding

ACTON, Calif. (KABC) -- Acton residents are digging out of a muddy mess Friday, one day after a summer storm caused flash flooding in the area.

Homes and businesses were damaged due to flooding, which left a layer of mud and debris over the small community.

"This only lasted maybe 15, 20 minutes at my house. By the time it was through, the lawn was almost all white. I mean, it was just unbelievable," described Jack Kracke, an Acton resident.

Fire rescue crews airlifted a man to safety after his pickup truck got stuck in an Acton flash flood.

The hail came down hard, and so did the rain. Roads quickly flooded, leaving several drivers in need of rescue.

Also Thursday, about 200 passengers ended up getting stuck on a Metrolink train, which was stopped after flood waters eroded part of the tracks both in front and behind the train.

Hours later, the passengers were eventually sent back to the departing station in Santa Clarita. Anyone who needed to go to other parts of Acton, Palmdale or Lancaster were given an alternate form of transportation.


Residents who hunkered down at home watched in surprise as strong winds whipped through the neighborhood.

The winds generated by this storm were hurricane force, pulling trees out of the ground and snapping others at the base.

In many areas of town, the waters have yet to recede. Cars being stored in a local lot were seen completely flooded.

Several homes have water damage inside, and local businesses were also hit hard.

Victor Quezada, who owns a nursery, said most of his plants were swept away. He said he and his workers will try their best to salvage what they can to start over.

Acton residents are cleaning up, and the town will recover, but everyone agrees they won't forget the August storm that tore this place apart.