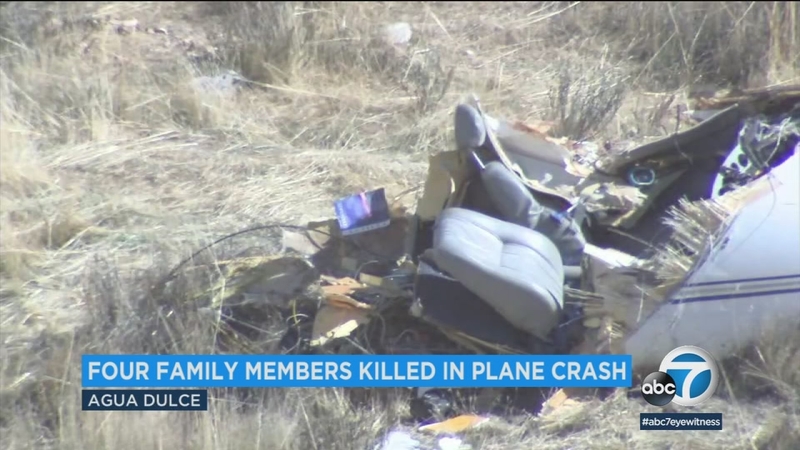 AGUA DULCE, Calif. (KABC) -- A witness who saw a small plane moments before it crashed in the Agua Dulce area - which killed four family members -- described the frightening moments before and after the tragedy occurred.

Federal investigators were back at the scene of the crash on Monday, combing through the wreckage of the small plane that crashed in the mountain range of the area Sunday morning.

There are a few homes a few acres away from where the plane went down. One man, who didn't want to be identified, described what he and his family heard and saw right before the plane crashed near his home.

"Here comes the plane right over the house, literally banks off to the right, really low. I mean, obviously, we're in a ravine in some mountains here, and it clipped the power lines, and it spun it around, and we didn't see anything else after that. We just got in the truck, brought a shovel, tried to get there as fast as we could. My dad and my neighbor were the first people there, and it didn't look too grim. It was a sad, you know, sad site," he said.

Friends and family have identified the four on board as Tom Hastings, his daughter, Amber Hill, her husband, Jacob Hill, and the woman's daughter, 9-year-old Madison.

Neighbors near the Hastings' San Fernando Valley home said the family enjoyed flying the plane that Hastings built years ago for the family to enjoy.

"He loved to fly, and they tried to fly on vacations as much as they could," said friend Jean Buetow. "He even extended his garage out on the side street there to make room for it. He spent all of his free time working on it, putting it together."

While the investigation continues into what caused the crash, the man who described what he saw said he'll never forget what happened.