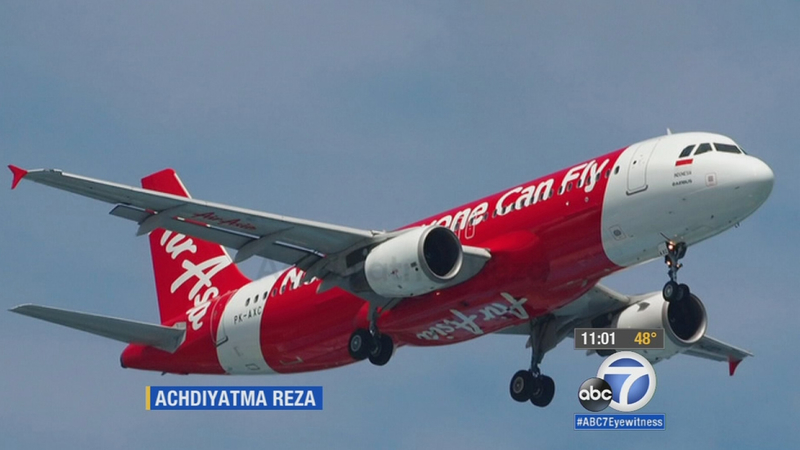 JAKARTA, Indonesia (KABC) -- An AirAsia plane with more than 160 people on board lost contact with ground control on the way from Indonesia to Singapore, airline officials said.

Search and rescue operations got underway for the Airbus A320-200, according to the airline, which disappeared early Sunday. Weather may have played a role in the plane's disappearance.

Flight QZ8501 from Surabaya to Singapore lost contact with air traffic control shortly before 6:30 a.m., the airline said in a statement. The flight lost contact about an hour before it was due to land, according to the Civilian Aviation Authority of Singapore.

The plane lost contact about 42 minutes into the flight, after the single-aisle jetliner took off from Indonesia's Surabaya airport, Hadi Mustofa, an official of the transportation ministry told Indonesia's MetroTV. The plane was believed to be over the Java Sea between Kalimantan and Java islands, Mustofa said.

According to Mustofa, the weather in the area was cloudy. AirAsia says the pilot was requesting a change in the flight plan, asking to go to a higher altitude because of approaching weather. That's when communication was lost, but no distress signal was received.

More than 160 people were on board, including seven crew members and 155 passengers including 16 children and an infant. The airline says the majority on board were Indonesian. The airline did not have immediate updates regarding the passengers and crew.

The Civilian Aviation Authority of Singapore says crisis management centers have been established and they are working with AirAsia's crisis management team. A waiting area and support have been setup for family and friends of the passengers at Changi Airport. The Singapore air force and navy were also activated and now have two C-130 planes searching for the missing aircraft.

President Barack Obama has been briefed on the plane's disappearance. White House officials say they will continue to monitor developments.

This is the third major air incident for Southeast Asia this year. On March 8, Malaysia Airlines flight 370, a wide-bodied Boeing 777, went missing soon after taking off from Kuala Lumpur for Beijing. to this day, it remains missing with 239 people in one of the biggest aviation mysteries. Another Malaysia Airlines flight, also a Boeing 777, was shot down over rebel-controlled eastern Ukraine while on a flight from Amsterdam to Kuala Lumpur on July 17. A total of 298 people on board were killed.

The Malaysia-based AirAsia, which has dominated cheap travel in the region for years, has never lost a plane before. AirAsia is a regional low-cost carrier with presence in several Southeast Asian countries.