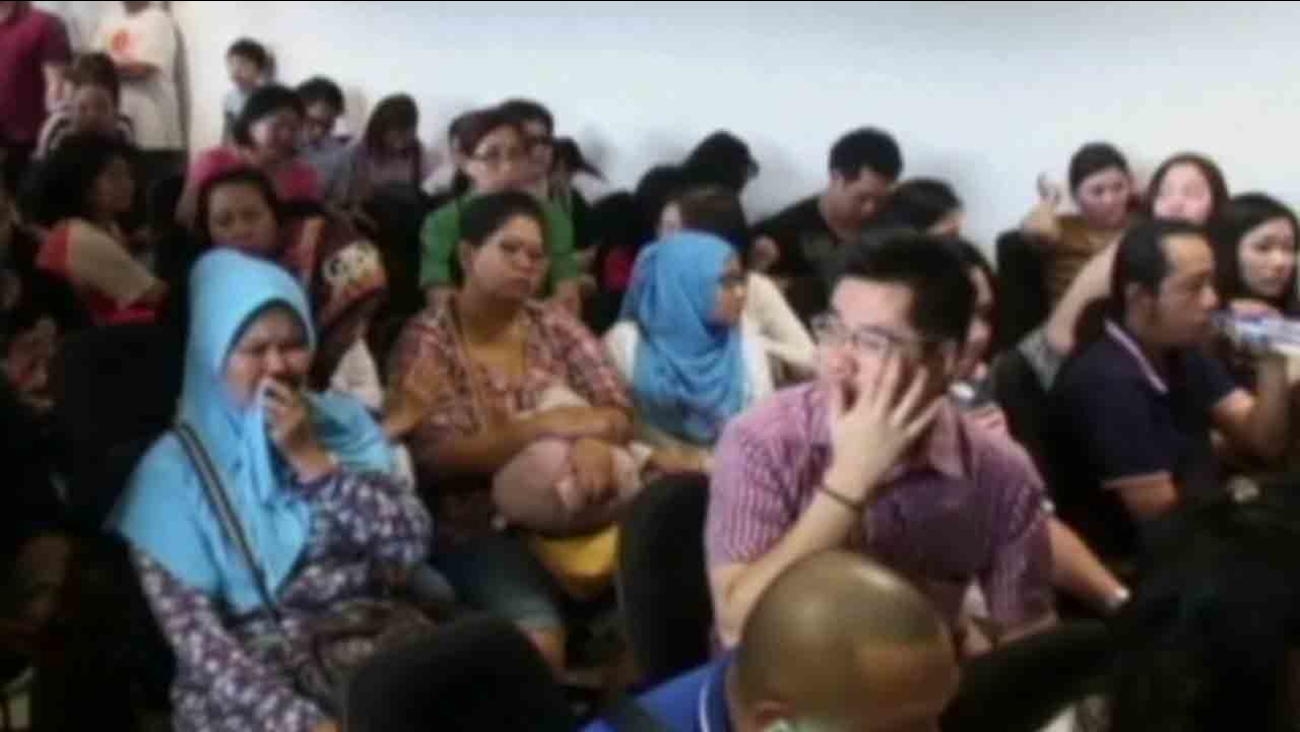 Dozens of relatives of people aboard the missing AirAsia jet gathered in a room at Surabaya airport Sunday, Dec. 29, 2014 to await word about their loved ones.

JAKARTA, Indonesia -- An AirAsia jet with 162 people on board disappeared Sunday while flying from western Indonesia to Singapore on a scheduled two-hour flight. Here's a look at the key developments:

- The last communication between the pilot and air traffic control was made at 6:12 a.m. (2312 GMT Saturday), when the pilot asked to turn left and climb to 11,582 meters (38,000 feet) to "avoid clouds," according to Djoko Murjatmodjo, Indonesia's acting director general of transportation. Murjatmodjo said there was no distress signal from the cockpit.

- AirAsia said the Airbus A320-200 was on the submitted flight plan route. Murjatmodjo said it is believed to have gone missing somewhere over the Java Sea between Tanjung Pandan on Belitung island and Pontianak, on Indonesia's part of Borneo island.

- Indonesia's Meteorology and Geophysics Agency said dense storm clouds were detected up to 13,400 meters (44,000 feet) in the same area at the time the plane was reported to have lost contact.

- Indonesia, Singapore and Malaysia are involved in the search and rescue operation. Three Indonesian aircraft were dispatched to the area, while Singapore's air force and navy search with two C-130 planes. Indonesia said 200 rescuers were deployed to the east side of Belitung island. The air search was suspended at nightfall and set to resume at 6 a.m. Monday (2300 GMT Sunday).

- Dozens of relatives of people aboard the plane gathered in a room at Surabaya airport to await word about their loved ones. Among the passengers were three South Koreans and one each from Singapore, Malaysia and the United Kingdom. The rest were Indonesians.

- Malaysian businessman Tony Fernandes, AirAsia's chief and the face of the company, tweeted, "This is my worst nightmare." He flew to Surabaya and said at a news conference that the focus should be on the search and the families. "We have no idea at the moment what went wrong. Let's not speculate at the moment," he said.

- After being suspended for darkness, the search for the plane resumes Monday morning, more than 24 hours after it was first reported missing.