Alec Baldwin to Melania Trump: 'Come over to the light' 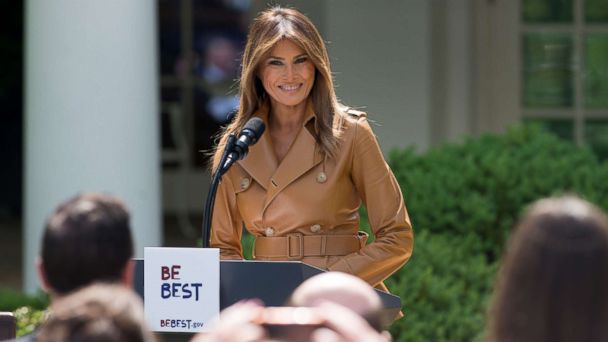 Alec Baldwin invited first lady Melania Trump to "come over to the light" -- and then asked the first lady to join him on NBC's "Saturday Night Live."

"Dear Melania- We know what you're thinking. What you're feeling. You are quaking w anticipation. Shuddering w a strange, newfound courage," Baldwin tweeted on Saturday. "Come. Come over to the light. We will welcome you as a hero in ways you never imagined possible. And then do SNL w me. Sincerely, Alec."

Baldwin's invite came amid a firestorm over a jacket that the first lady wore while traveling to McAllen, Texas, to visit a center that houses migrant children.

The words "I really don't care, do u?" were printed on the back of the green hooded jacket, but when asked whether the first lady intended to send a message by wearing this jacket, her spokeswoman, Stephanie Grisham, said: "It's a jacket. There was no hidden message. After today's important visit to Texas, I hope the media isn't going to choose to focus on her wardrobe."

The actor also tweeted an old picture of himself and Melania Trump from the Hilaria and Alec Baldwin Foundation Twitter account with the caption, "We have a chair waiting for you in the @nbcsnl make-up room."

A spokeswoman for Melania Trump, Stephanie Grisham, said Baldwin may have a "crush" on the first lady.

"He mentioned her again?" she said. "I used to say he was using her name for publicity, but now I'm starting to think Mr. Baldwin may have a crush on Mrs. Trump that is becoming borderline obsessive."

Baldwin, who has been playing President Trump on "SNL" since 2016, said in March that every time he does his presidential portrayal it's "agony."

This prompted a rapid response from the president, who slammed "SNL" and Baldwin several times and previously described the show's portrayal of him as "a hit job."

"Alec Baldwin, whose dying mediocre career was saved by his terrible impersonation of me on SNL, now says playing me was agony," Trump tweeted in response to the actor's March comments. "Alec, it was agony for those who were forced to watch. Bring back Darrell Hammond, funnier and a far greater talent!"

Although the President has consistently slammed "SNL," Trump famously hosted the show as a candidate in 2015 amid several protests and then boasted about his episode's ratings.
Report a correction or typo
Related topics:
abc newsnational
Copyright © 2020 ABC News Internet Ventures.
More Videos
From CNN Newsource affiliates
TOP STORIES