Floating plastic islands of debris in Pacific cause concern 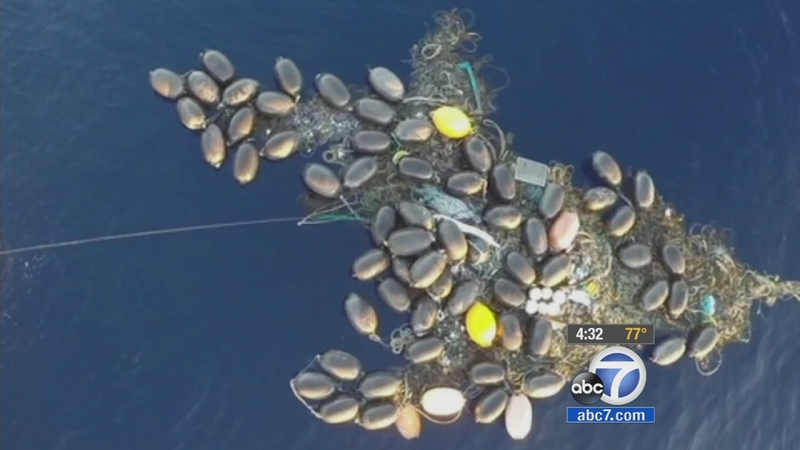 Floating islands of plastic in Pacific cause concern

LONG BEACH, Calif. (KABC) -- Researchers released new images of islands of plastic debris floating in the Pacific, and fear the problem is growing.

Algalita Marine Research Institute scientists discovered the first "Great Pacific Garbage Patch" more than a decade ago. Back out to sea again, they're not liking what they're seeing.

"They found a lot more plastic farther away from the area that's called the 'Great Pacific Garbage Patch' than they've ever seen. So they ran across it sooner than they expected, and it was a lot of debris," said Algalita Executive Director Marieta Francis.

They're also looking below the surface of the ocean, and taking samples to determine which species are ingesting the plastic, and whether the livers of fish that other fish, animals and humans eat are riddled with toxins because of the plastic.

"What we have speculated for years is probably in fact happening: That we need to be concerned about eating the fish. We think in the middle of the ocean is fine, but they're ingesting toxins, perhaps, as well," said Francis.

So what can humans do to fix the situation? Nothing much, in terms of getting rid of the plastic that is already there. Most of it will eventually wash up on shore, the ocean's natural way of cleaning itself. But that could take hundreds of years.

Now the focus has to be on prevention.

"We stop more from getting out there," said Francis. "We take care of it on land. We look at what we're doing ourselves to try to eliminate things that are going to become pollution. Do we really need a straw when we go to a restaurant? Do we need to use plastic forks? Those kinds of things."

The team of scientists will spend six weeks at sea to get an even better understanding of how plastic is affecting our ecosystem and breaking down in the ocean.

"We'll know more after this expedition, after 15 years of what we've been studying, just how much really is different about it," said Francis.

A public presentation is scheduled for Sunday, July 20, at the Cabrillo Marine Aquarium in San Pedro.