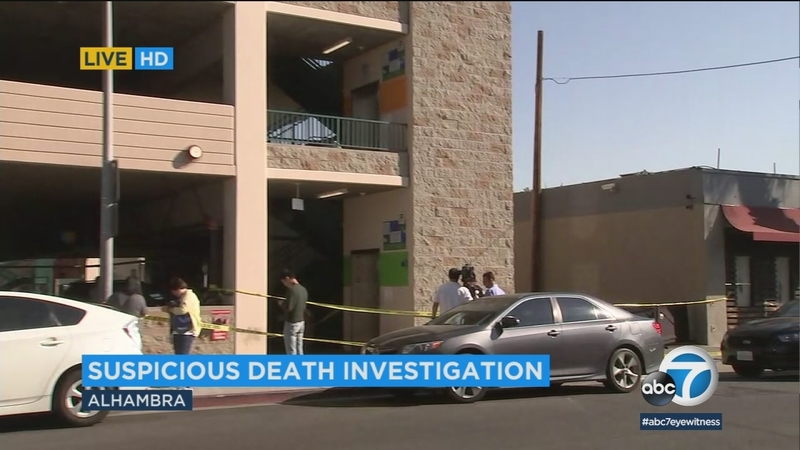 ALHAMBRA, Calif. (KABC) -- A man who called to report that his wife fell to her death in Alhambra is under arrest facing murder charges after investigators called out inconsistencies in his story.

A tragic fall from the roof of a parking structure in the area of 1st and Main streets is what the victim's husband told authorities.

According to Alhambra police, Russell Henry Errett called just after 1 a.m. Thursday to report the woman's fatal fall and said their 3-year-old daughter was in a car in the structure at the time. The child was not injured.

After questioning the 55-year-old, police said his story didn't match up, and they arrested him on suspicion of one count of murder.

Investigators were now looking into the possibility that the 29-year-old victim, Hui Li, was killed at a different location.

Investigators also said they now believe the daughter may have witnessed the alleged killing.

Errett's vehicle remained on the first floor of the parking structure as authorities continued to investigate the scene. Authorities were also checking for surveillance footage that may have captured the incident.

Meantime, Errett's bail has been set at $1 million, according to Alhambra police.

ABC7 has decided to remove the comments section from stories. We believe very strongly that our audience should have an opportunity to discuss and debate events in our world; however, we have not been able to moderate the comments as well as we would like. Instead of hosting a platform that could allow a few loud and ugly voices to dominate a conversation, we want to encourage everyone to join us on our social media platforms and speak out there.
Facebook: facebook.com/abc7
Twitter: twitter.com/abc7
Report a correction or typo
Related topics:
alhambralos angeles countyarrestfalldeath investigation
Copyright © 2021 KABC-TV. All Rights Reserved.
TOP STORIES
14-year-old boy killed in Apple Valley hit-and-run; suspect sought
Florida shootout: Dog breeder exchanges gunfire with teen robbers
Former NYPD chief says latest find amid Laundrie search is 'strange'
Singer Ángela Aguilar visits Boyle Heights to boost local restaurants
Millions throughout SoCal to participate in statewide earthquake drill
Hit-and-run suspect barricaded in Huntington Park home
Dodgers fall into 3-1 hole in NLCS with loss to Braves
Show More
Police find items belonging to Brian Laundrie, apparent human remains
Salmonella illness linked to onions consumed in 37 states including CA
Parents of unrestrained girl killed on ride sue theme park
Gas hits $7.59 a gallon in CA town
Garcetti to LA city workers: Get vaccinated by Dec. 18 or lose job
More TOP STORIES News