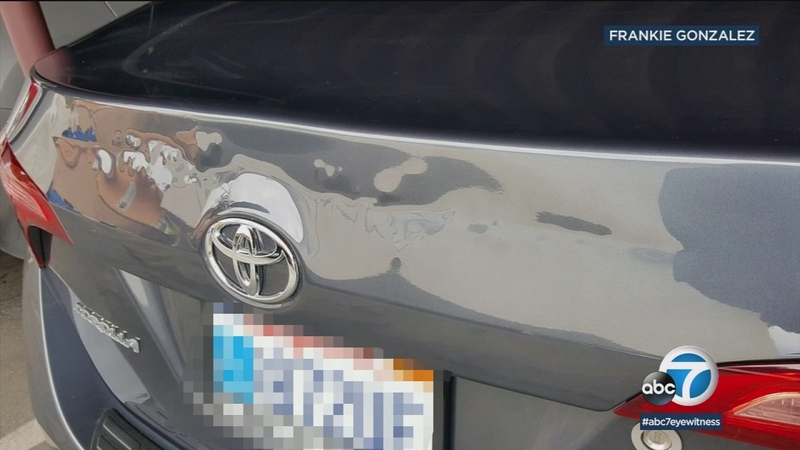 ALHAMBRA, Calif. (KABC) -- Rita Ellis's 2017 Toyota Corolla had more damage after she had repair work done than before.

"He said I can fix that, all I need to do is pop out the dent and just get rid of a few of the scrapes and I charge $200," said Ellis.

The scam happened when Ellis arrived at a South Pasadena Ralphs to go food shopping.

She was approached by a man named Daniel who gave her a fake business card. He worked on Ellis's vehicle three separate times and charged her $1,000 in all. Ellis said he had a license and at the time, she didn't realize the documents provided were fake.

"He has vanished and the last time he said he would fix it, he covered it up with turtle wax. He said don't do anything until 24 hours and when I looked at it in 24 hours, it looked worse than the original dent," said Ellis.

The California Bureau of Automotive Repair says you should look for the business name, license number, and telephone number on the repair shop's vehicle. The business should also be searchable in the BAR database.

"It happens every day," Gonzalez said. "Somebody chases you down in the parking lot and says I can fix that scratch or that dent for a really low price and I can do it on the spot or we can go to your house and then they ruin your car from there."

Rita Ellis is in the process of filing a police report, hoping she can prevent this from happening to someone else.
Report a correction or typo
Related topics:
alhambrasouth pasadenalos angeles countycarscam targeting seniorsscam
Copyright © 2021 KABC-TV. All Rights Reserved.
More Videos
From CNN Newsource affiliates
TOP STORIES