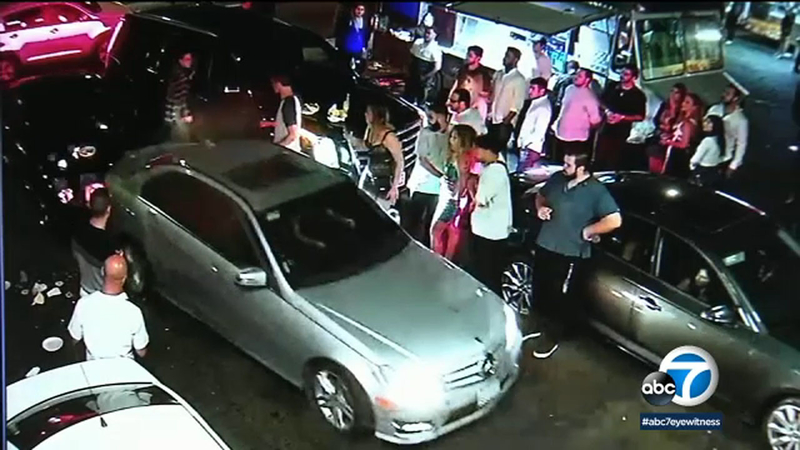 Alleged driver who smashed into parked car turns herself in

HOLLYWOOD, LOS ANGELES (KABC) -- The alleged driver who was captured on video ramming into a parked car at a Hollywood taco stand has turned herself into authorities.

Amber Rose Darbinyan turned herself into the Los Angeles Police Department Hollywood station on Thursday. She was awaiting bail.

Video captured on the night of Aug. 24 by bystanders shows a woman knocking a plate of food out of another person's hand. She then gets into a Mercedes and starts violently backing into a parked car, over and over, near the corner of Western and Lexington avenues.

New video released on Wednesday shows the driver of the Mercedes having some type of argument with a group of people as they crowd around her.

Jose Romero, the attorney representing the alleged driver, Amber Darbinyan, says people outside of the taco truck targeted his client because of her social media personality.
EMBED More News Videos

The alleged driver who was captured on video ramming into a parked car at a Hollywood taco stand has turned herself into authorities.

"She has had a history of public interaction with people attacking her verbally just because they think that she is that person on TV or on the internet being the quote unquote bad girl," Romero said.

No charges have been filed in the case but Darbinyan's attorney does think she may face a vandalism or battery charge. Darbinyan is expected to remain in jail until at least next Tuesday. She has a no-bail warrant out of San Bernardino regarding a case in which she was involved in a pursuit with authorities in 2018, according to officials.
Report a correction or typo
Related topics:
hollywoodlos angeleslos angeles countycar crashroad rage
Copyright © 2021 KABC-TV. All Rights Reserved.
TOP STORIES
California now only state at 'moderate' COVID transmission level
SoCal parents, teachers rally against student vaccine mandate
Ridley-Thomas will 'step back' from LA City Council
LAPD releases video of North Hills crash that killed 18-month-old
Arson suspected in Pasadena fires
Rising sea levels could submerge Santa Monica Pier
'Ghost gun' seizures in LA have increased 400% since 2017
Show More
3 burned in fire at Canoga Park marijuana grow operation
Passengers do nothing as woman is raped on train, police say
18-month-old in stroller dies in North Hills crash
Local animal hospital says there's an industry-wide staffing shortage
Disabled participants go on zero gravity plane ride
More TOP STORIES News