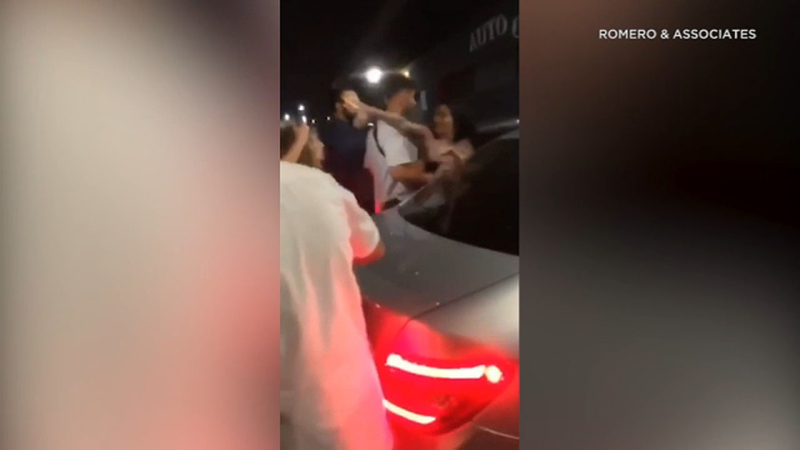 HOLLYWOOD, LOS ANGELES (KABC) -- The attorney for the alleged driver who was captured on video ramming into a parked car at a Hollywood taco stand is speaking out.

Video captured Saturday night by bystanders shows a woman knocking a plate of food out of another person's hand. She then gets into a Mercedes and starts violently backing into a parked car, over and over, near the corner of Western and Lexington avenues.

New video released on Wednesday shows the driver of the Mercedes having some type of argument with a group of people as they crowd around her.

Jose Romero, the attorney representing the alleged driver, Amber Darbinyan, says people outside of the taco truck targeted his client because of her social media personality.

"She has had a history of public interaction with people attacking her verbally just because they think that she is that person on TV or on the internet being the quote unquote bad girl," Romero said.

Romero says his client was not detained because police don't have a reason to arrest her, citing his conversations with detectives.

Police with the LAPD Hollywood Division said they are aware of a vandalism report in connection with the incident but would not say anything else.
Report a correction or typo
Related topics:
hollywoodlos angeleslos angeles countycar crashroad rage
Copyright © 2021 KABC-TV. All Rights Reserved.
More Videos
From CNN Newsource affiliates
TOP STORIES