Suspects in custody after 3 wounded in string of shootings in Altadena, authorities say 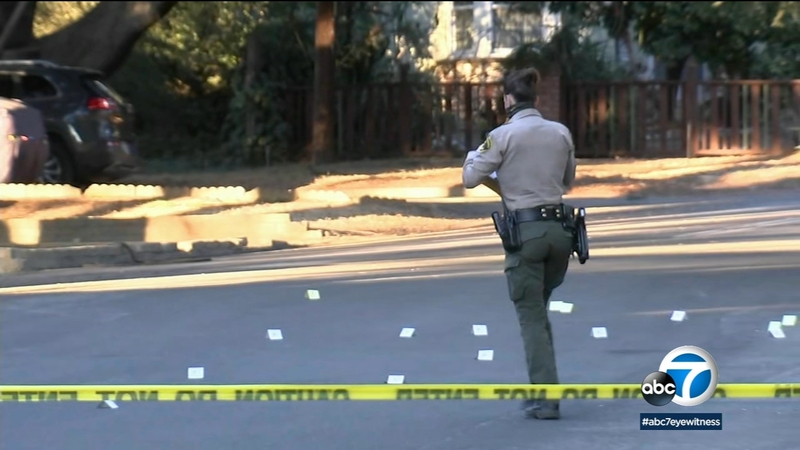 3 wounded after string of shootings in Altadena, authorities say

ALTADENA, Calif. (KABC) -- Three suspects were taken into custody after a string of shootings in upscale areas of Altadena that left three men wounded Sunday afternoon.

Three shootings happened in the span of approximately 50 minutes and within a two-mile radius. An additional shooting occurred a few hours later.

At two locations, deputies found men who had been struck by gunfire several times, according to the Los Angeles County Sheriff's Department.

The most recent shooting happened shortly after 5 p.m. in the 200 block of West Harriet Street, where a man was shot in the lower extremities. His condition is unknown.

The Altadena Sheriff's Station alerted the public to be on the lookout for three males in a silver/grey vehicle, possibly a Nissan Maxima sedan.

Shortly after the most recent shooting, Officers from @PasadenaPD detained a vehicle w/3 male black adults, that matched the description of the susp described in earlier shootings. Dets took suspects into custody in connection w/the shootings. There is no addtl info at this time.

Just before 9 p.m., authorities announced three suspects were in custody in connection to the shootings after they stopped their vehicle and determined they matched the suspect descriptions. They were not immediately identified.

The first shooting happened at about 12:11 p.m. in the 3100 block of Santa Anita Avenue. It was there that authorities say multiple gunshots were heard and one man was wounded. The 49-year-old victim's condition was unknown, but he is expected to survive.

"It sounded like a barrage of firecrackers going off," said neighbor Victoria Cabre-Valentino.

She said she ran out and saw her neighbor on the ground, and rushed to help him.

About 30 minutes later, deputies responded to another shooting call near two separate liquor stores in the 2600 block of North Fair Oaks Avenue, but they did not find anyone injured.

In the 3100 block of Olive Avenue, witnesses reported hearing several shots, and when deputies arrived to the scene, they found a 31-year-old man wounded. His condition was also unknown, but he is expected to survive.

Witnesses said it was a drive-by shooting.

It was not clear how or if the shootings were connected. The investigation is ongoing.