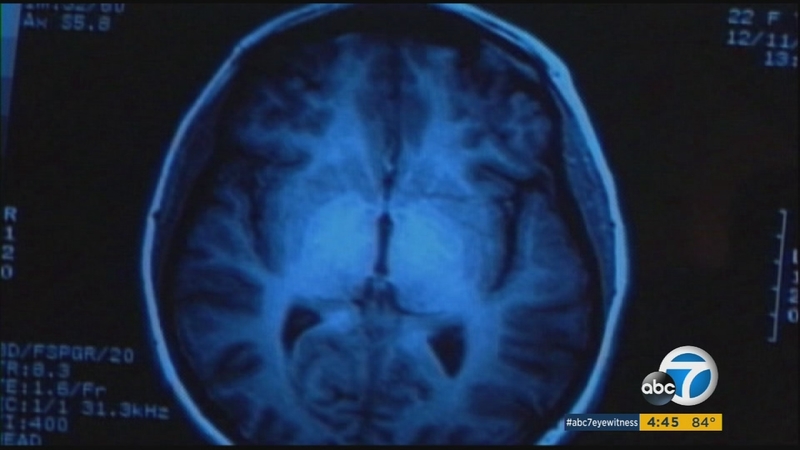 WESTWOOD, LOS ANGELES (KABC) -- Local researchers find evidence for what they call a powerful prescription for staving off Alzheimer's disease.

For the first time, UCLA scientists can see exactly how a few lifestyle interventions can protect the brain.

At age 56, Ray Wells is one of the 200,000 Americans diagnosed with early onset Alzheimer's. But he hasn't let the disease run his life.

He described how he still enjoys being able to work and be with his friends.

Doctors say memory lapses probably started in his 40s, but his wife, May Gonzalez, believes his love of tennis helped protect his brain for years.

"He plays very high level, competitive tennis and he's winning," she said as she laughed.

Now, for the first time UCLA researchers have evidence that shows a healthy lifestyle can reduce the type of damage that causes Alzheimer's.

Previous studies suggested a link, but being able to actually see this on a PET scan was exciting for researchers.

"We now have the smoking gun, so to speak, of the molecular effect of exercise on the brain as well as diet," said Dr. David Merrill with the UCLA Psychiatry Cognitive Health Clinic and Research program.

Researchers tracked 44 adults, ranging in age from 40 to 85, with mild memory problems but no dementia. They underwent an experimental type of scan called Molecular Positron Emission Tomography. It tracked the hallmarks of Alzheimer's disease which are brain plaque and tangles.

Merrill said: "When we divided participants based on their lifestyle habits, we found that people who exercise regularly and followed a Mediterranean-style diet actually had lower levels of plaque and tangles in the brain."

The three protective factors were cardio 30 minutes a day with two or more days of weight training, eating a diet rich in fruits, vegetables and grains and low in meat and dairy - and having a healthy body mass index. Everyone in the study benefited from all three, but those at high risk for Alzheimer's benefited from exercise the most.

"They might consider doubling down by starting an exercise regimen," said Merrill.

To get people in the community motivated, UCLA is offering interventional programs in the form of fitness assessments and exercise prescriptions.