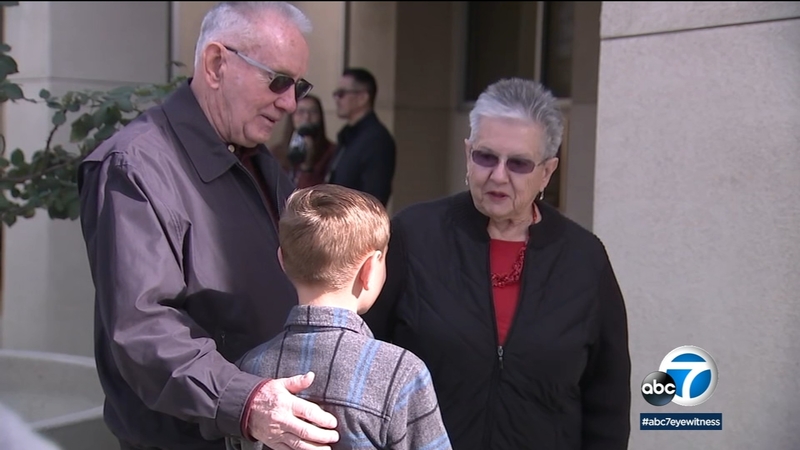 An eight-year-old boy was honored for his role in helping find an 83-year-old man with Alzheimer's who had been missing in the Lakewood area.

LAKEWOOD, Calif. (KABC) -- An eight-year-old boy was honored for his role in helping find an 83-year-old man with Alzheimer's who had been missing in the Lakewood area.

On Wednesday, Jaxon Opdyke was presented a pin and several gifts from the Los Angeles County Sheriff's Department's Lakewood Station.

Opdyke was part of a neighborhood search team, along with his grandmother, who were looking for Roger Dunworth. On Sunday, he helped reunite his neighbor with his family.

The sheriff's department's Mental Health Evaluation Team also responded with a tracking device to hone in on a bracelet Dunworth wears at all times as part of the Project Lifesaver program.

The family of a Manhattan Beach woman who had Alzheimer's disease and went missing near LACMA in 2016 said they were relieved but left riddled with questions after her remains were positively identified.

"There are high-risk individuals that go missing often and they are unable to tell us where they are coming from, where they live, where they need to go, so these are really critical members of the community that utilize Project Lifesaver in trying to get them back from their family members," said deputy Daniel Cerda.

Since it was implemented in 2018, the program has helped locate 31 critically missing people. But before authorities could punch in Dunworth's tracking number, the eight-year-old hero found him a few streets away.

The Dunworth family say they are grateful for his help and for the peace of mind that the program gives them.