Oscars: What you need to know about the Best Picture nominees 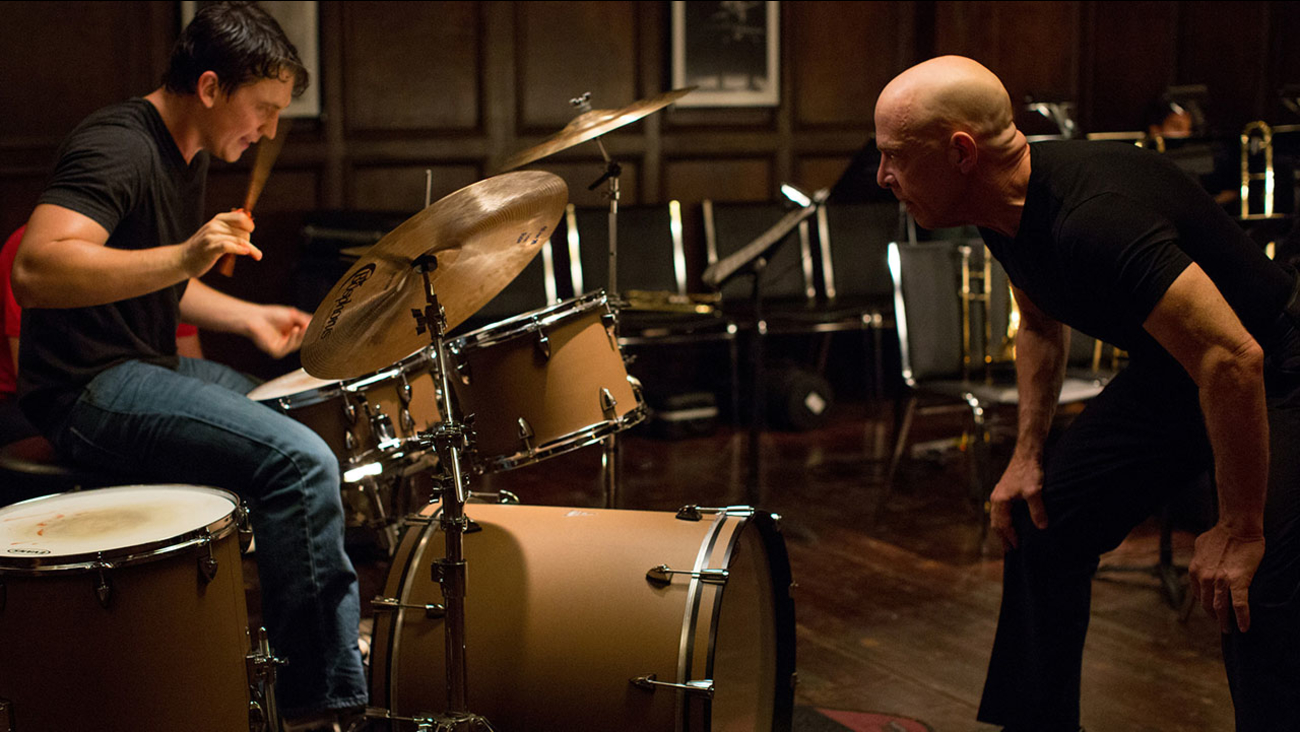 "Whiplash" is one of the eight films battling for this year's Best Picture Oscar. (Sony Pictures Classics, Daniel McFadden / AP)

The 87th Oscars are happening this Sunday on ABC, and all of Hollywood is wondering who is going to take home Best Picture. But if you weren't able to see all of these Oscar-worthy flicks, here's what you need to know about this year's Best Picture nominees.

Chris Kyle was credited with over 160 confirmed kills during his tenure as a sniper for the Navy SEALS, the most in U.S. military history. But Clint Eastwood's harrowing biopic dives deep into Kyle's psyche, focusing on the violence and terror the sniper faced during his three tours in Iraq, while struggling to maintain strong ties with his loved ones back home. Based on the now-deceased sniper's best-selling memoir, the film hasn't been without its controversy, with many accusing the film of being a pro-war propaganda piece. Eastwood, however, addressed critics, saying that "Sniper" was "the biggest anti-war statement any film can make," according to The Hollywood Reporter.

Asides from controversy, Bradley Cooper has been praised for his physical transformation and harrowing performance as Kyle, receiving a Best Actor nomination in the process. "'American Sniper,' Eastwood's 37th film as a director, is his darkest, tightest and most morally ambiguous drama since he shot the western dead with 'Unforgiven,'" wrote Colin Covert of the Minneapolis Star Tribune.

Easily one of the most bizarre but beloved movies of 2014, "Birdman's" hilarious and insightful take on one washed up actor's attempts to regain glory through the Broadway stage isn't your typical moviegoing fare. The film is portrayed in what looks like almost one single take, effectively portraying the feel of watching a play on the silver screen. But while director Alejandro Gonzlez Inarritu isn't afraid to sink his hands into experimental storytelling, it's the eclectic, Oscar-nominated performances of Michael Keaton, Emma Stone, and Edward Norton that bring "Birdman" to new heights.

Many cast members in "Birdman" say that Riggan is a representation of Inarritu, reflecting on the director's personal struggle criticizing his work and fear of failure. Keaton's role as Riggan Thompson is also very self-referential, with Keaton portraying the Caped Crusader in Tim Burton's "Batman" films. "Birdman takes advantage of every facet of Keaton's talent, from his knack for absurdist comedy to his seemingly effortless ability to tap into graceful profundity without making a big show of it," said Rene Rodriguez of the Miami Herald.

Filmed over the course of 12 years, Richard Linklater's ambitious "Boyhood" became the talk of the 2014 Sundance Film Festival and quickly became a favorite for a Best Picture nomination. Focusing on Mason, a quiet but soulful Texas boy played by Ellar Coltrane, the film follows Mason as he constantly moves with his mom and sister across the Lone Star state, dealing with his mother's alcoholic and abusive boyfriends, school bullies, and whatever problems adolescence throws his way.

But it isn't just Ellar Coltrane, the actor at the center of this time-capsule drama, who undergoes a dramatic evolution. Patricia Arquette and Ethan Hawke, who received Oscar nominations for their portrayal of Mason's estranged parents, undergo an incredible cinematic transformation as well, learning more about the world and themselves, and desperately trying to get the hang of this parenthood thing. "Boyhood is proof that a strange magic can still bloom amidst the tragedy that buffets human life," writes Paula Mejia of Newsweek.

Wes Anderson brings back his quirky, lavish filmmaking style to "The Grand Budapest Hotel," a raucous comedy depicting the eccentric concierge of a luxury, alpine hotel in Europe, and and the ambitious and forthright bellboy he takes under his wing. While Ralph Fiennes' portrayal as charming and cordial M. Gustave was the comedy center of the film, "Budapest" also lodged hilarious performances from other noteworthy actors, including Adrien Brody, Willem Dafoe, Edward Norton, Jeff Goldblum, Harvey Keitel, Jude Law, and Bill Murray. Throughout its marvelous absurdity and delightful performance from Fiennes and crew, "The Grand Budapest Hotel" made an early reservation for Best Picture nominee when released in March of last year.

"It offers an engaging 90+ minutes of unconventional, comedy-tinged adventure that references numerous classic movies while developing a style and narrative approach all its own," writes James Berardinelli of ReelViews.

Today he's considered the father of modern computer science, but back during WWII, Alan Turing helped crack a previously thought unbreakable Nazi code, helping the Allies win the war. With Benedict Cumberbatch starring as Turing and Keira Knightley as his code-breaking compatriot Joan Clarke, "The Imitation Game" gives a haunting portrayal of this brilliant, complicated mathematician, expertly displaying his odd quirks and struggle to keep his homosexuality a secret in a society that would not tolerate it. But the film never fails to highlight Turing's massive contributions to the wartime effort and computers as a whole.

The producers of "The Imitation Game" discovered Turing's story in a 2009 Telegraph article, where Prime Minister Gordon Brown formally apologized on behalf of the British government for the treatment of Turing, who was convicted of gross decency for his homosexuality. "'The Imitation Game' leaves Turing's essential mysteries intact, but they will nonetheless find even the most public contours his story ripe with drama, excitement and deeply affecting resonance," wrote Ann Hornday of the Washington Post.

If one were to make a full-length biopic of Martin Luther King Jr.'s entire life and accomplishments, it would probably run for over 10 hours long. But "Selma," the first film centered around the civil rights leader, zooms in on King's involvement in the 1965 Selma to Montgomery voting marches in Alabama, allowing audiences to see the iconic civil rights leader in a very humanistic light. David Oyelowo has been praised for his mirror image portrayal as King, but the film itself has been subject to controversy for its portrayal of President Lyndon Johnson. While the film depicts Johnson as a force working against King, historians have argued that LBJ was a huge supporter of the Voting Rights Acts.

The film's director, Ava DuVernay, addressed these criticisms on Twitter. "Notion that Selma was LBJ's idea is jaw dropping and offensive to SNCC, SCLC and black citizens who made it so. Bottom line is folks should interrogate history. Don't take my word for it or LBJ rep's word for it. Let it come alive for yourself." Regardless of its depiction of LBJ, "Selma" has been praised by critics for its portrayal of Martin Luther King Jr. and vivid depiction of a harrowing chapter in U.S. history. "We see history as it unfolds, not as it has been encased in amber, in a movie that needs to be seen in these anxious days of renewed racial and cultural unrest," wrote Peter Howell of the Toronto Star.

The Theory of Everything

He's widely believed to be the world's greatest mind, but "The Theory of Everything" depicts everything you didn't know about Stephen Hawking and his early love Jane Wilde, played by Eddie Redmayne and Felicity Jones, respectively. Based off the memoir "Traveling to Infinity: My Life with Stephen" by Jane Hawking, the film shows Hawking and Wilde's blooming romance at the University of Cambridge when Hawking is diagnosed with the debilitating motor neuron disease. As Hawking and Wilde struggle with his affliction, the two defy all odds, and achieve more than they could have ever dreamed.

This touching biopic features powerful performances from both leads, who were each nominated for Best Acting Oscars, and even got a thumbs up from Hawking himself. "'The Theory of Everything' is not afraid to reveal honest, intimate and emotionally painful moments in this couple's relationship. We witness two characters who are heroic but human as they struggle to get to heart in the center of their own universes," writes Randy Myers of the San Jose Mercury News.

Winning the Grand Jury Prize and the Audience Award at the 2014 Sundance Film Festival, "Whiplash" had the right dramatic beats and rhythms to ensure itself a Best Picture nomination. Detailing the story of an ambitious young drummer named Andrew and his tumultuous relationship with an abusive but brilliant music instructor named Fletcher, "Whiplash" focuses on the crazy lengths and sacrifices musicians make to achieve greatness, as mentors continue to push them past their breaking point and then some.

"Whiplash" is almost an autobiographical film for director Damien Chazelle, who grew up playing jazz drums and had an abusive music instructor. Chazelle even taught Miles Teller how to play the drums for his role as Andrew. J.K. Simmons, who is nominated for a Best Supporting Actor Oscar for his role as Fletcher, actually conducted the orchestra throughout the film. "'Whiplash' is electric from beginning to end, a musical story of obsession, frustration and outright cruelty built on two knockout performances," wrote Tom Long of the Detroit News.