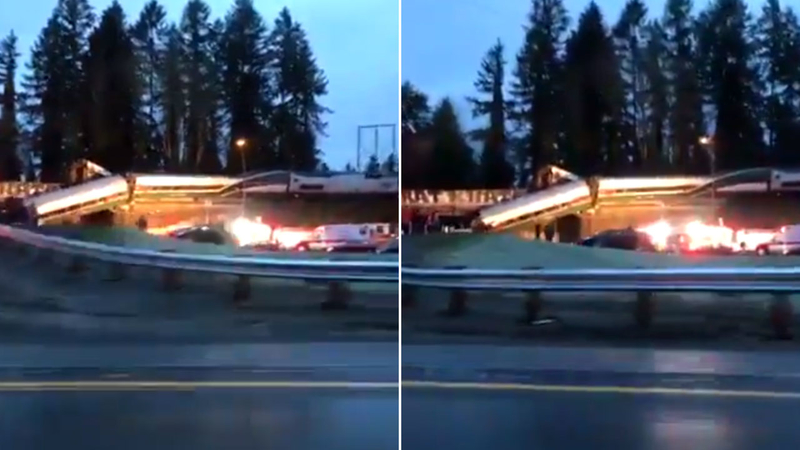 Video from the scene of the train derailment in Washington State

DUPONT, Wash. -- Close friends and rail advocates Zach Willhoite and Jim Hamre were traveling together when they were among the three people killed in a train derailment on the inaugural trip of a new Amtrak route from Seattle to Portland.

Jim Hamre and fellow train enthusiast Zack Willhoite were among the victims of Monday's deadly derailment outside Seattle.

Willhoite, 35, and Hamre, 61, were both workers in transportation and board members of rail advocacy organization All Aboard Washington, according to the Associated Press.

"It's pretty devastating. We're having a tough time," All Aboard Washington executive director Lloyd Flem told the AP.

Willhoite worked as an IT customer service support specialist with Pierce Transit since 2008, his employer said. Hamre retired as a civil engineer from the Washington Transportation Department a few years ago.

It's heartbreaking to hear that @PierceTransit employee and rail aficionado Zack Willhoite did not survive the derailment. He helped our advisory committee with IT issues, and behind the scenes he was a writer and advocate for better transit for all. He will be missed.

The friends were travelling on a new Amtrak route known as the Point Defiance Bypass. According to the National Transportation Safety Board, the train was traveling 80 mph around a curve that had a 30 mph speed limit.

Part of the train careened off a highway overpass into a heavily trafficked area on Interstate 5 below, leading to three deaths and dozens of injuries.