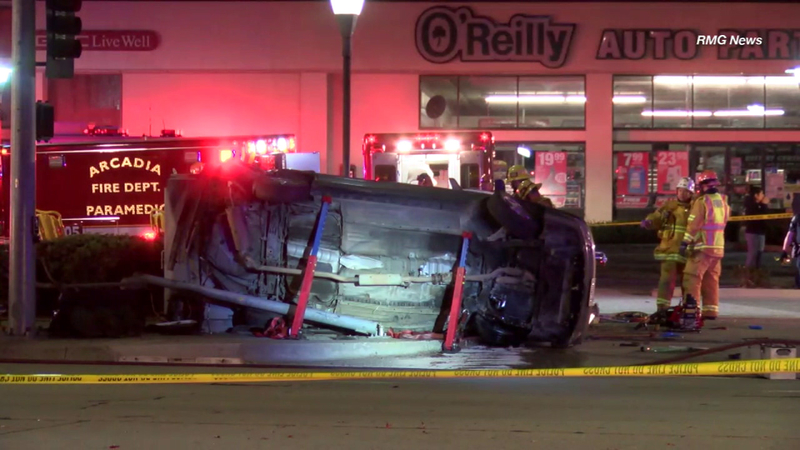 ARCADIA, Calif. (KABC) -- Three people were dead and another was in grave condition after a car overturned Tuesday morning in a single-vehicle collision in Arcadia, authorities said.

The incident occurred shortly before 2 a.m. on Live Oak Avenue at Las Tunas Drive, according to the Arcadia Police Department. A Toyota Avalon was traveling westbound at a high-rate of speed when it spun out of control, hit a wall and landed on its side.

Marcus Garcia, 21, was driving three of his friends home from a birthday celebration at a bar, according to family members and friends. The festivities had been held for the 25th birthday of the car's sole female occupant.

"Was he out drinking? Most likely," Garcia's mother, Elizabeth Quinn, said in an interview at the scene. "They're decisions of young adults. He was that fun-loving person, had that irresponsible side to him."

Firefighters responded to the location and extracted the four occupants. Three victims died at the scene, and a young man was rushed to a hospital. Garcia was among the deceased.

Investigators said the Toyota apparently spun backward about 50 or 60 feet during the collision.

It was unclear if the driver and passengers were wearing seat belts at the time.

"I'm still in shock because I feel like they're just going to get up and say, 'Hey dude, we're alright, we had a bad accident yesterday, you know, we're sore,'" said Jeff Salazar, a friend of the victims. "But I've got to think about, like, they're not going to come back."

Investigators have not confirmed whether alcohol was a factor in the incident.

Anyone with information about the crash is asked to call the Arcadia Police Department at (626) 574-5151.