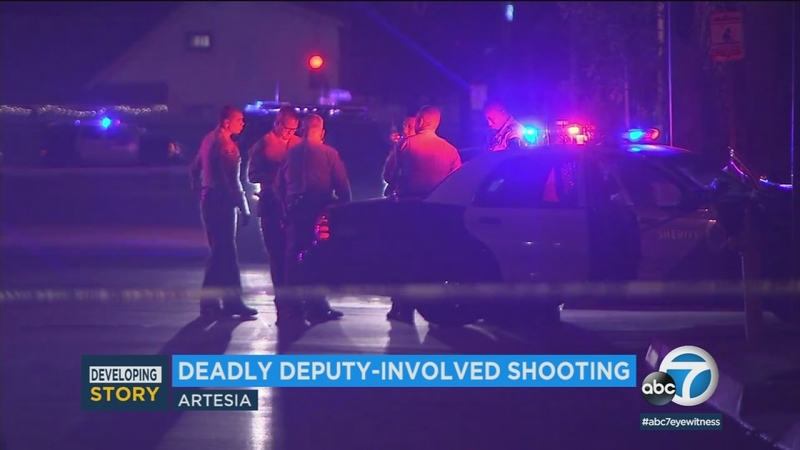 ARTESIA, Calif. (KABC) -- A 49-year-old man was shot and killed Sunday evening in a deputy-involved shooting in Artesia after he wounded two deputies with a knife, according to the Los Angeles County Sheriff's Department.

The deputies were transported to a hospital after suffering cuts on their hands, authorities said in a news release.

The incident began just before 9:30 p.m. when deputies from the sheriff's Lakewood station responded to a report of a suspicious person in a vehicle near the intersection of Droxford Street and Elaine Avenue, the statement said.

A caller said the suspect was driving an SUV and looking into parked vehicles, according to the sheriff's department. A second call indicated the man drove onto a lawn and abandoned the vehicle.

The suspect was seen fighting with an unknown person and then walking away from the area, investigators said. Deputies arrived to find the man between two homes.

"The suspect was uncooperative, physically attacked deputies, and a fight ensued," the news release said, adding that the deputies used a Taser but it was not effective.

According to authorities, the man then armed himself with a knife and cut two of the deputies, "at which time a deputy-involved shooting occurred." The man was struck at least once in the torso; he was transported to a hospital, where he was pronounced dead.

The extent of the deputies' injuries was unknown.

A multi-agency investigation into the incident is ongoing.