Arrest made in break-in of St. Charles Borromeo Church in North Hollywood 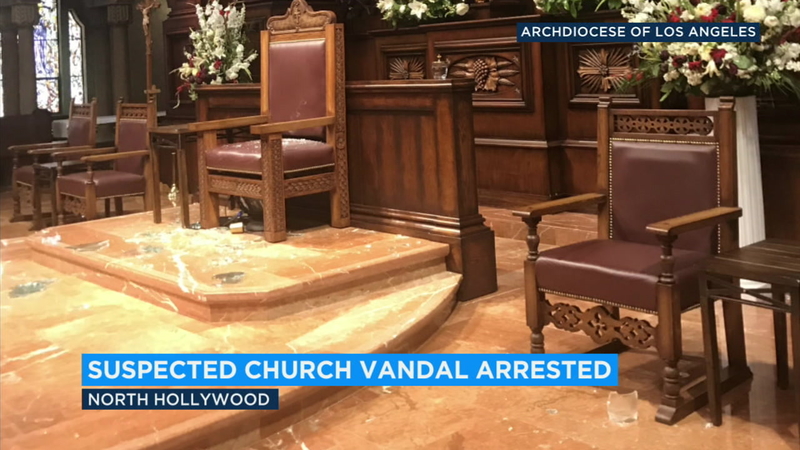 Arrest made in break-in of North Hollywood church

NORTH HOLLYWOOD, LOS ANGELES (KABC) -- A 58-year-old man was arrested Monday in connection to a break-in at a North Hollywood church.

Russell Congleton was taken into custody shortly before 8 a.m. near Lankershim Boulevard and Riverside Drive after someone recognized him from a flyer and called police. He is accused of getting into into St. Charles Borromeo Catholic Church last week and starting a fire.

Los Angeles police got a call just before 5 a.m. Wednesday that someone broke into the church. Because of the extensive damage done near the altar, all masses were canceled.

Parishioners of St. Charles Borromeo church in North Hollywood had emotional reactions after learning that someone broke into their house of worship and damaged it.

The church is a well-known landmark in the San Fernando Valley. Neighbors refer to it as the church Hollywood legend Bob Hope and his wife Dolores built. Their funeral masses were held at the location.

Even though investigators did not call the act a hate crime, the house of worship task force was called to the investigation, which included the FBI.
Report a correction or typo
Related topics:
north hollywoodlos angeleslos angeles countyarrestfirevandalismchurch
Copyright © 2021 KABC-TV. All Rights Reserved.
More Videos
From CNN Newsource affiliates
TOP STORIES