KABC
By Veronica Miracle and ABC7.com staff
NEWPORT BEACH, Calif. (KABC) -- An arrest was made in connection to a 1973 cold case involving the murder of an 11-year-old girl in Newport Beach, ABC News reports.

Linda O'Keefe disappeared while walking home from school in a blue and white dress on Friday, July 6, 1973. The next morning, authorities discovered her strangled body in Back Bay.

Witnesses saw a turquoise van where O'Keefe was last seen.

"We have a couple of witnesses who saw a suspicious van and a man near her. We know she never made it home," said Jennifer Manzella, with Newport police.

In July 2018, the Newport Beach Police Department launched a social media effort to tell O'Keefe's story in her own voice on the anniversary of her disappearance.

Using DNA from the crime scene, age-progression technology also helped to create a new composite of the suspect - one of what he looked like in 1973 and then one of him 45 years later.

"Take DNA that the killer left behind at the scene and develop a snapshot, composite image of what the killer might look like," Manzella said.

Police did not provide details Tuesday on whether the new technology did help them find the right suspect in the end. 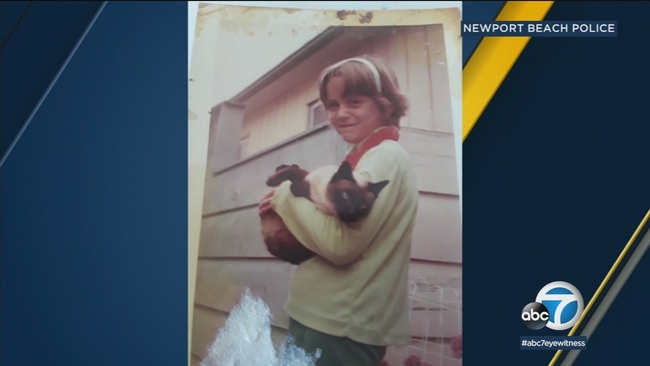