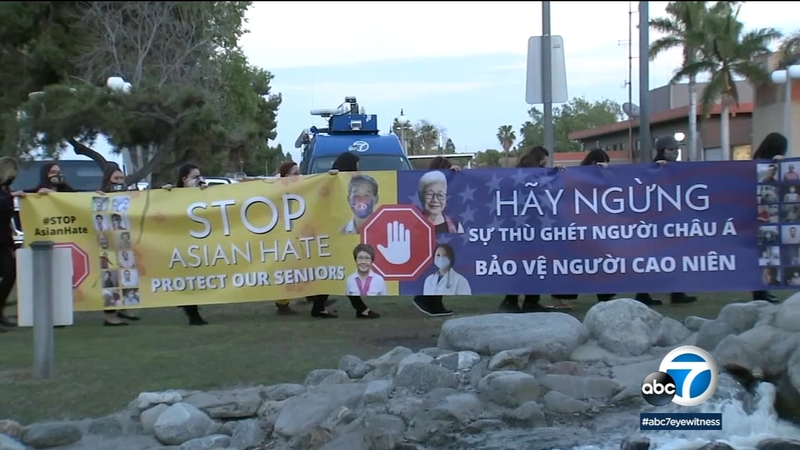 GARDEN GROVE, Calif. (KABC) -- A show of unity sparked by recent attacks on Asian Americans was on display in Garden Grove, where community members gathered to condemn the violence and call for peace.

The crowd on Wednesday gathered in the Little Saigon area, where a recent deadly shooting in Georgia is raising concerns about safety among the city's Asian American community.

"That could have been our sisters, our aunts, our mothers, our cousins - anybody. All these attacks going on, it's getting out of hand," said Andrew Boriboune, a visitor to the city.

The gunman in Tuesday's shooting targeted three spas in the Atlanta area, killing eight people. Six of the victims were identified as women of Asian descent.

"You cannot hunt women down and drive 40 miles and target them and not call it a hate crime," said one community member at Wednesday's vigil honoring the victims of the surge in anti-Asian hatred and violence.

"These days, even when I go out, I don't make eye contact. I just don't because I don't want to provoke anybody," said Garden Grove resident Linda Nguyen.

Nguyen shared her story about a racially-motivated encounter she had while shopping.

"I was in line to do an order pick-up and behind me there was a couple that coughed and said 'Stay away from her, she has coronavirus' and they laughed," she said. "And in nearly 40 years living here, I've never experienced something like that in a public setting."

Speakers at the event called for unity and raised a banner with the message "Stop Asian Hate."

"It just makes me realize how much more of a role that I have, that I need to take to continue the battle for equality," said Paul Youn, who was one of the people in attendance.