Victims injured during deadly crowd surge at Astroworld Festival in TX as young as 10, officials say

At least eight people died and numerous others were injured at the festival in Houston while rapper Travis Scott was performing.
AP 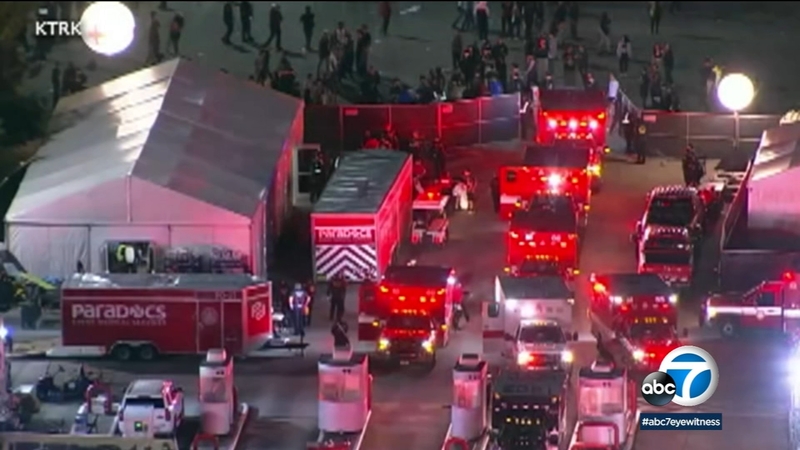 HOUSTON -- Fans attending a Houston music festival surged toward the stage during a performance by rapper Travis Scott, triggering panic in the crowd of tens of thousands. At least eight people were killed and many more hurt, authorities said.

The chaos unfolded Friday evening at Astroworld, a sold-out, two-day event at the NRG Park stadium. An estimated 50,000 people were in attendance. It was not clear what set the crowd in motion.

"The crowd began to compress towards the front of the stage, and that caused some panic, and it started causing some injuries," Houston Fire Chief Samuel Peña told a news conference. "People began to fall out, become unconscious, and it created additional panic."

Seventeen people were taken to hospitals, including 11 who were in cardiac arrest, Peña said, and "scores of individuals" were injured.

Witnesses reported lots of pushing and shoving during the performances leading up to Scott's set.

When Scott took the stage, the crowd seemed to rush to the front, trying to get closer to the stage, said Nick Johnson, a high school senior from the Houston suburb of Friendswood who was at the concert with friends.

"It just got worse and worse. Everyone was like you just can't breathe," said Johnson, who was near the front of the stage in the middle part of the crowd.

Johnson said fans started to crush each other, and people started screaming. He said it felt like 100 degrees in the crowd, which was so thick that he and his friends could not move.

"Everyone was passing out around you, and everyone was trying to help each other. But you just couldn't move. You couldn't do anything. You can't even pick your arms up," Johnson said.

Scott seemed to be aware that something was going on in the crowd, but he might not have understood the severity of the situation, Johnson said.

In a video posted to social media, Scott could be seen stopping the concert at one point and asking for aid for someone in the audience: "Security, somebody help real quick."

In a tweet posted Saturday, Scott said he was "absolutely devastated by what took place last night." He pledged to work "together with the Houston community to heal and support the families in need."

Houston Police Executive Assistant Chief Larry Satterwhite, who was near the front of the crowd, said the surge "happened all at once."

"Suddenly we had several people down on the ground, experiencing some type of cardiac arrest or some type of medical episode," Satterwhite said. "And so we immediately started doing CPR and moving people right then."

Satterwhite said he quickly met with promoters, who agreed to end the event "in the interest of public safety."

Amy Harris, a freelance photographer for The Associated Press, described an "aggressive" crowd atmosphere throughout the day because of the way fans were behaving - pushing and rushing the stage barricades and prohibited VIP and admission areas.

"It was definitely the most chaotic festival environment that I've been in," Harris said. "I felt uneasy all day."

At one point, she got trapped behind a barricade while photographing performer Don Toliver because about 300 fans rushed the area. They ended up behind the security barricade with her.

Harris said she encountered a similar scene for the main act at a different stage. She left the media pit after three songs because of the pandemonium, which included people being pulled over the security barricade to receive medical attention.

Houston Police Chief Troy Finner urged people not to jump to conclusions about what caused the surge.

"I think it's very important that none of us speculate. Nobody has all the answers tonight," Finner said.

"We're going to do an investigation and find out because it's not fair to the producers, to anybody else involved, until we determine what happened," he said.

Event organizers had arranged for medical teams to be at the festival. But once the crowd surge began, those teams were "quickly overwhelmed," the fire chief said.

A field hospital at the scene examined about 300 people throughout the day, he said.

Scott, one of music's biggest young stars, released two new songs earlier Friday, "Mafia" and "Escape Plan." The 29-year-old Houston native has been nominated for eight Grammy Awards. He has a 3-year-old daughter with Kylie Jenner, who announced in September that she's pregnant with their second child.

Drake joined Scott on-stage at the concert - which was livestreamed by Apple Music - and posted photos to Instagram after the performance.

Officials set up a reunification center at a hotel for family members who had not been able to reach relatives at the event. Authorities sought to connect families with fans who were taken to the hospital, "some as young as 10" years old, said Harris County Judge Lina Hidalgo, the county's top elected official.

Scott founded the Astroworld Festival in 2018, and it has taken place at the former site of Six Flags AstroWorld each year since, except for 2020 because of the coronavirus pandemic.

The deaths called to mind a 1979 concert by The Who where 11 people died and about two dozen were injured as thousands of fans tried to get into Cincinnati's Riverfront Coliseum.

Other music events that resulted in fatalities in recent years include the Las Vegas shooting massacre in 2017, when a gunman perched in a hotel window killed 58 people at the Route 91 Harvest Festival, the so-called Ghost Ship fire in 2016 that killed 36 people in a California warehouse during a dance party and a 2003 nightclub fire that killed 100 people in Rhode Island.