It's a move many Native Americans have decried as degrading and damaging for years.
KABC
By Marc Cota-Robles and Joseph Maxfield 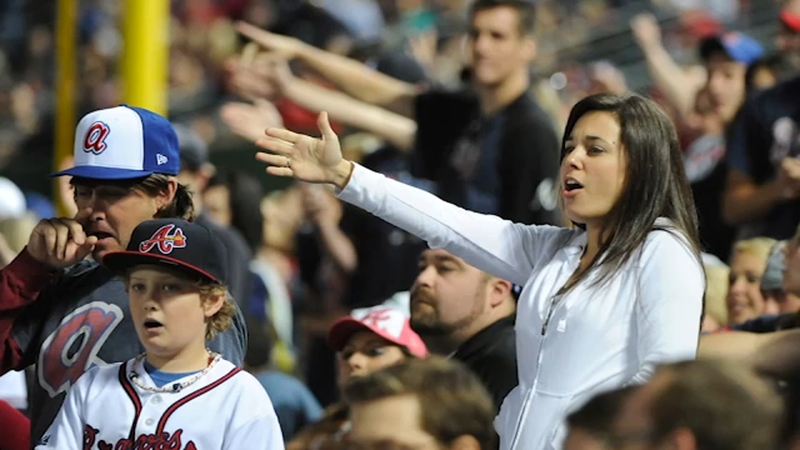 ATLANTA, Ga. (KABC) -- When the Braves finished off their NLCS win over the Dodgers, the packed Atlanta home crowd did what they have done for decades: a tradition Braves fans call the tomahawk chop.

It's a move many Native Americans have decried as degrading and damaging for years.

In an era where large corporations like Major League Baseball are moving away from offensive stereotypes, Atlanta's continued use of "the chop" was a topic reporters asked MLB commissioner Rob Manfred about just before the World Series started.

But in a statement, the National Congress of American Indians responded saying, " ... the tomahawk chop that the team exhorts its fans to perform at home games (is) meant to depict and caricature not just one tribal community, but all Native people. Consequently, the league and team have an obligation to genuinely listen to Tribal Nations and leaders across the United States about how the team's mascot impacts them. Native people are not mascots, and degrading rituals like the tomahawk chop that dehumanize and harm us have no place in American society."

The controversy isn't new of course.

Former Braves owner Ted Turner, his then-wife Jane Fonda and former President Jimmy Carter all gleefully joined in on "the chop" when the Braves were in the postseason 30 years ago.

Next season, the Cleveland Indians will become known as the Cleveland Guardians, following the lead of the Washington Football Team in abandoning Native American names and symbols long viewed as racist.

The Braves and Astros split the first two games of the World Series, guaranteeing the series goes at least five games. If there's a Game 6, it will be on Tuesday.