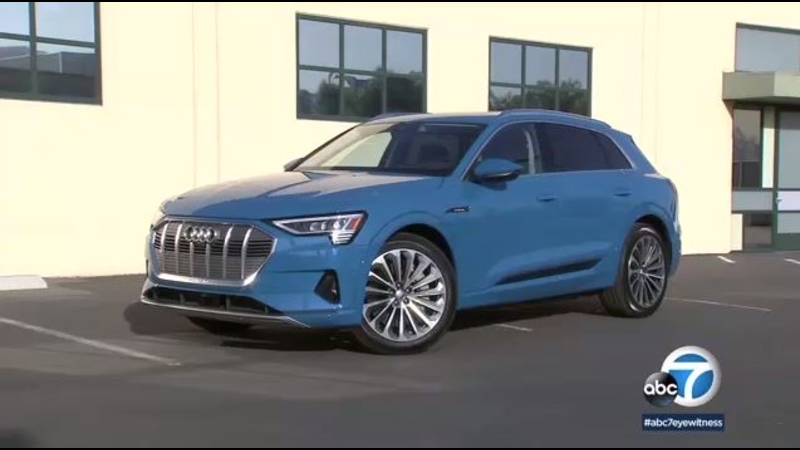 There's a new Audi model out right now. That wouldn't normally be unusual, but this new Audi is one that breaks new ground for the German brand. It's the e-tron, a fully-electric SUV.

A bit delayed from its initial launch target, the e-tron is now rolling into dealerships and rolling along the road with the electric drive that's currently sweeping the European auto industry. Jaguar got the jump on everyone last year with their I-Pace EV, and we're about to see new plug-in models from Porsche and Mercedes-Benz.

The e-tron is about the same size as Audi's other new SUV this year, the Q8. But while that one is gasoline-only, this one is electric-only, the first of a series of Audi models using the e-tron designation. The interior is plenty roomy with two rows of seats and a huge cargo area, the winning formula for a premium crossover SUV these days. Yep, it's definitely premium, with a starting price of $75,000 before tax incentives.

Range on a fully-charged battery is officially 204 miles, per the EPA. That may not sound like a great number, compared to other premium EVs these days, or even some non-premium ones. But Audi says that's a real-world number that owners can easily duplicate. Also, they say they've made the vehicle very easy to live with.

Audi has partnered with Electrify America, a new network of ultra-fast 150kw public charging stations. They're popping up at shopping locations and near highways to rapidly replenish the e-tron's battery, with about 50 miles of range for every 10 minutes plugged in. Grab juice while you grab groceries. And e-tron buyers' first 1000 kilowatt-hours of charging are free via Audi.

The e-tron will also keep track of its range via the navigation system. Taking into account things like elevation changes, you'll get a range update based on where you're headed. Going up to the mountains? You'll use more juice on the climb, obviously. Heading back downhill on your return? The range estimate will be updated.

So this isn't the first luxury electric vehicle on the market. But it is Audi's first offering, a brand that has a pretty loyal following. And this vehicle is part of what's shaping up to be an onslaught of luxury EVs from across the Atlantic.
Report a correction or typo
Related topics:
automotiveauto industrycarselectric vehiclesauto news
Copyright © 2021 KABC-TV. All Rights Reserved.
TOP STORIES
18-month-old in stroller dies in North Hills crash
Hollywood union calls off strike, for now
NLCS: Dodgers fall behind 0-2 in series after loss to Braves
Supervisors call for investigation into Ridley-Thomas charges
CHP holds graduation ceremony for K-9 teams
NLCS Game 2: Justin Turner scratched with neck injury for Dodgers
Bill Clinton released from UCI Medical Center after blood infection
Show More
LA County wants Vanessa Bryant to take psychiatric exam before trial
Coast Guard: Ship owner, operator of interest in OC oil spill
10-year-old boy says father 'drowned him a lot,' court records show
US religious group says 17 missionaries kidnapped in Haiti
Masks and vaccines are a must this holiday season, CDC says
More TOP STORIES News