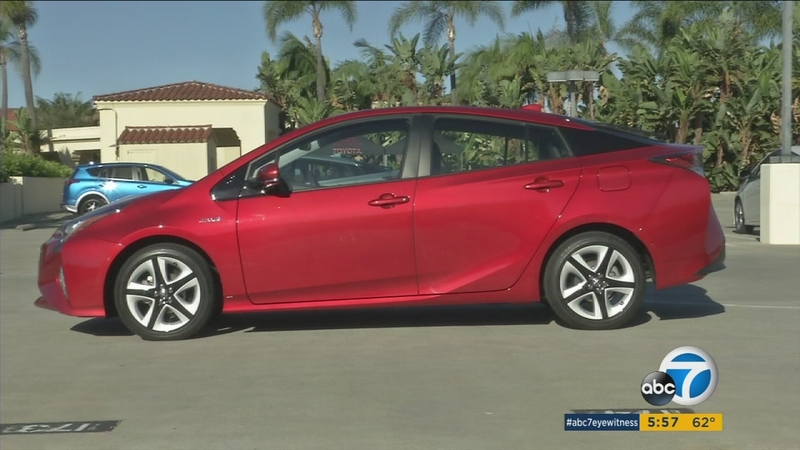 New 2016 Toyota Prius takes hybrid to the next level

LOS ANGELES (KABC) -- It's a brand-new design for the 2016 Toyota Prius, but it's also instantly familiar when you first see it.

"The Prius name is an icon in this field. It's been around the longest, and it's the best-selling hybrid in this country and probably the world too," said David Lee, a Toyota spokesman.

The Prius goes back to the year 2000, but the big turning point was the 2004 model which ushered in the signature look.

The 2016 is still a hybrid and still continues its mission of fuel economy.

But Toyota figured it was time to give the car a bit of pizzazz, both visually and dynamically behind the wheel.

To prove the point, Toyota let members of the media try out the new Prius on a handling course set up at the old El Toro base in Orange County.

The words Prius and handling didn't seem to go together in the past.

"We have a new chassis that's 60 percent more rigid and an independent rear suspension. So when you drive this car now, it handles more like a sporting vehicle and not just a point-A to point-B car," noted Lee.

The electric drive system, the battery, and the gasoline engine are all improved to bump estimated combined mileage up to 52 miles per gallon in city driving and 58 mpg with the special "eco" package.

Even if a driver doesn't see a person walking out into the street, the Prius can, and will apply the brakes to avoid a collision.

And then there's that famous Prius shape, the one that the car's been associated with for two prior generations.

That's the shape of aerodynamic efficiency, so the new version wears an updated variation of it.

Toyota is fully aware that not everyone wants the Prius' distinctive looks. So they're now offering the compact RAV-4 SUV as a hybrid for the first time, adding to Toyota's array of hybrid models.

But the Prius remains the brand's signature hybrid. And it's been a good signature over the years.

Now, with new looks and a more engaging driving experience, it continues its futuristic mission.