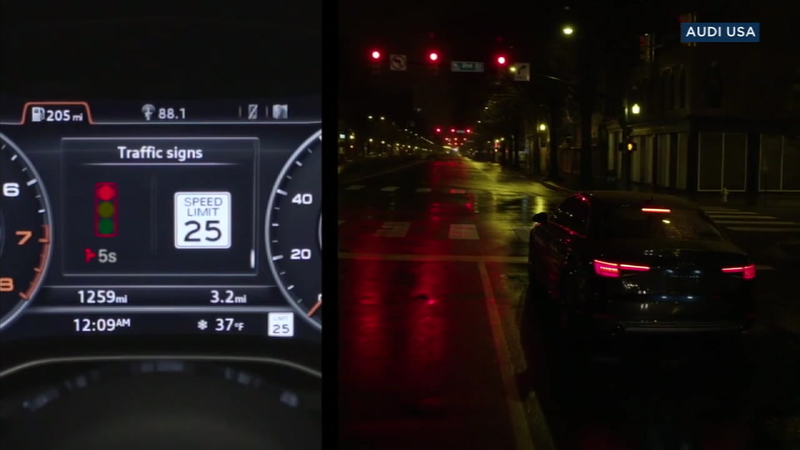 ARCADIA, Calif. (KABC) -- Traffic lights are part of driving, and often seen as an inconvenience.

Nobody likes to get stuck at red light after red light.

But what if your car could tell you when the light is going to change?

Some new Audi models actually can.

"The information from the traffic signal is going right to the vehicle," said Kevin Merrill, principal engineer for the City of Arcadia, which has the infrastructure to make the Audi system work.
It's called Traffic Light Information, and Audi has integrated it into many of its 2018 models. The car receives data from the signal system in 10 cities around the country, Arcadia being one of them. It's not every intersection in Arcadia, but many of the major ones.

"We've been a really forward-thinking city. Ten years ago we put in a traffic control system that really laid the groundwork for where we are today," said Arcadia's Kevin Merrill.

An Audi driver doesn't have to do anything special.

When the car gets within range of one of the transmitting traffic signals, an icon of a traffic light appears on the center screen display, along with an indicator of how many seconds until the light will change to green.

The screen displays other info too, notably the speed limit of the road you're on. That speed limit can change to remind you that you're driving in a school zone, with the lower speed limit posted next to the regular one.

So far, traffic light information is only a one-way system. The infrastructure sends information to the car, not the other way around.

At least not yet.

"The next step is to reverse that, and have the vehicle send information to the traffic signal. We can then have the vehicle be the 'detector' versus an in-ground loop or video detection," added Arcadia engineer Kevin Merrill.
So far, this only works in a relative handful of vehicles, and only in a relative handful of places around the country. But this is just the first step in a bigger picture.

As technology gets us closer to cars being able to fully or even partially drive themselves, the communication of vehicles to infrastructure will become more and more critical. Cities like Arcadia that are getting on board early are making plans to take it further.

"The future looks bright for this type of information to be at your fingertips. Whether it be in a handheld device or in a vehicle dashboard," said Merrill.

It may seem like a bit of a gimmick at this point, but it's the beginning step of usable technology, available right now. Technology that could someday be a great benefit to all drivers, pedestrians, cyclists and transit passengers.
Report a correction or typo
Related topics:
automotivearcadiaauto industrytechnologytraffic
Copyright © 2021 KABC-TV. All Rights Reserved.
More Videos
From CNN Newsource affiliates
TOP STORIES