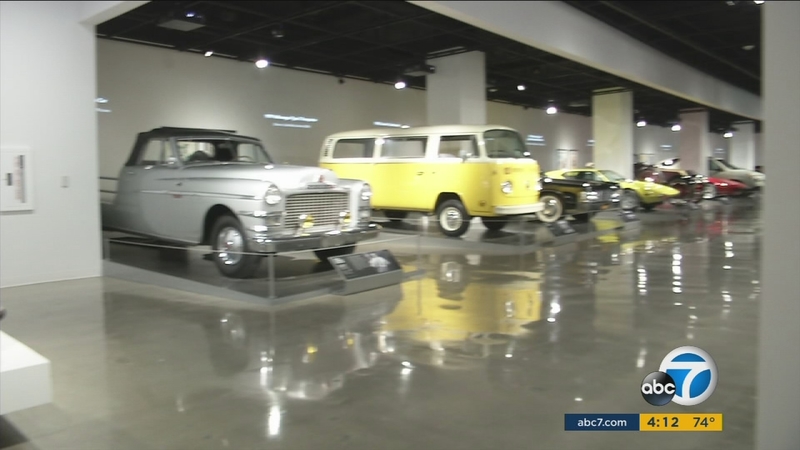 LOS ANGELES (KABC) -- A celebration of the all-new Petersen Automotive Museum took place ahead of its grand opening on Monday.

The building, located on the corner of Wilshire Boulevard and Fairfax Avenue in the Miracle Mile neighborhood in Los Angeles, is widely known for its extensive gallery of vehicles and educational mission.

"You're in the same building and interior structure, but you're now in a building that's been totally transformed, inside and out," said Terry Karges, the museum's executive director.

First opened in 1994 in a former Ohrbach's department store, the Petersen was looking a little tired after over 20 years.

The old exterior has been replaced by a dramatic new exterior featuring red metal panels and ribbons of stainless steel. The old interior was completely gutted and redone from top to bottom. There are now three full floors of exhibit space.

"Everyone who walks in here says, 'Oh my gosh, this is a 21st century storytelling museum.' We took all of the best elements from museums around the world, put them together here, and really created something very special," added Karges.

Many of the displays will feel familiar to anyone who visited the museum in the past, but in a whole new environment. Displays include exhibits to show the beauty of cars, as well as their inner beauty and a lot of technology to tell their stories.

You can't go very far without seeing a flat-screen monitor that's describing a car or a related element. Visitors can also take a tablet along and let it be their handheld docent.

From its beginning all those years ago, the Petersen Museum has had a mission of being educational, telling the story of how the automobile shaped Southern California. Now with the redesign, formal education is literally happening within the museum's walls.

The Pasadena-based Art Center College of Design has a new space for their Transportation Design students to work on projects right in public view. Nearby exhibits can also give the students inspiration.

The younger ones can get an education too, thanks to the Pixar Cars Mechanical Institute. Lightning Mcqueen, Tow Mater, and other characters from the Cars franchise can make this a fun learning experience.

"I really want the "Cars" characters to teach you what they naturally know," said Jay Ward of Pixar Animation Studios, himself a car enthusiast and the driving force behind the exhibit. "Luigi knows a lot about tires, Mater knows a lot about mechanics, and McQueen knows about racing, so why not use these characters with these natural things they know about to educate you?"

There's also an area where kids can learn to draw the various characters from the films, perhaps launching budding careers as car designers or animators.

Not open yet but coming in the spring to the museum's ground floor will be a restaurant by the Drago brothers, who operate many notable eateries around Southern California.