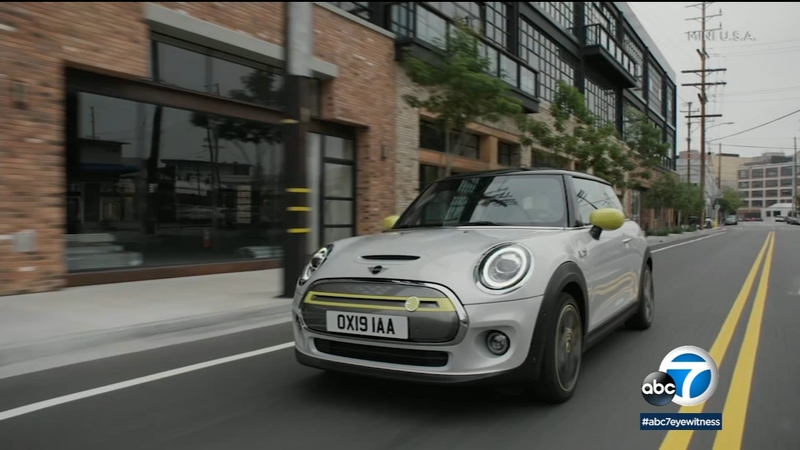 In the early 2000s, it was the Mini car brand returning to the United States. Then in the 2010s it was Fiat, doing the same after a long absence here. Both arrived as hip European brands taking North America by storm with cute small cars. But we seem to have fallen out of love with small cars recently in this country.

"I think it's just people like the luxury of space, of interior space. People forget that space is a luxury factor," said Andrew Bornhop, a veteran auto journalist with Irvine-based Kelley Blue Book

So with sales of the small models dropping in recent years, what are these once-hot European brands to do? One thing that's helping them is offering "bigger small cars" to shore up sales. Mini's hottest seller has become the Countryman, the brand's take on the compact SUV. And now it's sporting a new trick - optional plug-in hybrid power in the Countryman Plug-in Hybrid. It's an electric car for short trips (about 12-13 miles after a full battery charge), and it still has the unique flair of a Mini. Once the plug-in battery is depleted, it runs pretty much like any gasoline-powered car.

The Countryman Plug-in Hybrid carries a base price of $36,900 but since it's a plug-in hybrid, there are government incentives available to reduce the transaction price. Currently, the federal tax rebate is $4,000 on the vehicle, according to Mini USA.

Fiat is in this compact SUV game as well, with the 500X, newly revised for 2019. The four-door hatchback has lots of space compared to a regular Fiat 500, and comes standard with all-wheel drive.

"A lot of things are changing in the industry. Everywhere you look you see more and more crossovers, and with the 500X we set out to build the Fiat of crossovers," said Pieter Hogeveen, director of the Fiat brand in North America.

So like the bigger Mini, the bigger Fiat still feels like a Fiat on the road, tackling curves with aplomb, and still able to fit easily into parking spaces marked "compact. " It has a mix of cute European fun, and space for all your American friends and cargo.

Both Mini and Fiat have found that while their smallest cars aren't selling as well (Fiat is even discontinuing the basic 500 compact here after 2019), they may be able to hold onto their buyers and even attract new ones by offering the bigger models. And, they're trying to appeal to buyers' green side.

The Countryman Plug-in Hybrid is a preview of the direction Mini's going. Soon, you'll be able to get a fully electric version of the compact Mini Cooper called the SE. Battery power for what should be over 100 miles of driving - potentially an ideal urban vehicle.

Fiat isn't tipping its hand just yet, but they're studying electrification too, for future models. (The electric 500e - sold primarily in California - will be discontinued by year's end too, along with the regular 500 model.) Fiat will be selling a new electric version of the 500 in Europe next year, but haven't announced any specific plans for it in North America. In the meantime, they're offering improved efficiency with their turbo gasoline engine. After all, gas is still pretty expensive, and the new 500X is rated at 24 city and 30 highway, while offering more power than the previous 500X had.

"We cut our engine in half. But we're have more power, more torque, and lower greenhouse emissions," said Hogeveen.

The 500X starts at around $25,000 and the 1.3-liter Multiair turbocharged engine delivers 177 horsepower and 210 lb-ft of torque. A 9-speed automatic transmission is standard.

So the Fiat and Mini car brands may have hiccuped in the sales race recently, but don't count them out just yet. For drivers who want something European in nature and cool in execution, they're adapting to the times. And who knows, maybe small will become trendy again soon.
Report a correction or typo
Related topics:
automotiveauto industrycarsauto newsfiat
Copyright © 2021 KABC-TV. All Rights Reserved.
More Videos
From CNN Newsource affiliates
TOP STORIES