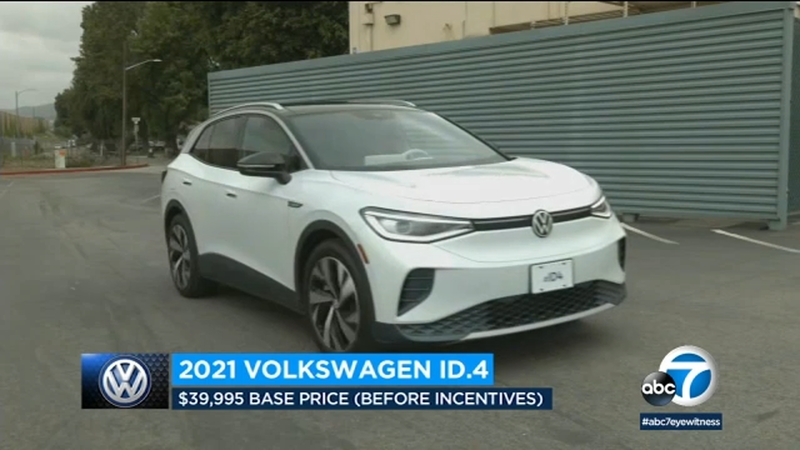 For decades, Volkswagen was known for putting millions of people into affordable wheels. The name literally means "the people's car."

But the people got burned a little back in 2015, when VW was busted for cheating on emissions systems on its diesel-powered cars.

Now, a new chapter in the brand's history. Part mea culpa, and part inevitability - a new line of all-electric cars, starting with the ID.4 compact SUV.

Like other EVs, it's quiet, quick, and doesn't produce emissions. It's also stylish, and caught a lot of attention on the road.

Climb into the 1st Edition model, and it's like stepping into a rolling Apple store with abundant white surfaces promising an experience of technology.

And the ID.4 delivers there, with not just safety tech aplenty, but connectivity - from the app that manages the car's systems, to 4G broadband that lets you hear your favorite internet radio stations.

Its range is about 250 miles, and when the battery gets low, the electric Volkswagen accepts high-speed charging. You can use one of the new Electrify America chargers popping up in places - VW had to pay for them as part of its emissions settlement with the government. Charge up the ID.4's battery while you grab coffee or groceries in about 30 minutes.

All of Volkswagen's new line of electric vehicles will have names beginning with ID, like this one, and including one that still a ways out, but has been getting tons of buzz, from the get-go.

And that's literally its name - ID Buzz. Yep, it'll be a people carrier in the spirit of the old Volkswagen microbus. But you'll have to be patient; it's still two years away. There are already buyers lined up waiting for it, even though the price and final design haven't even been revealed.

As for the ID.4, it starts at about $40,000, though incentives bring it closer to the $30,000-$35,000 range. Other electric ID models will follow, perhaps some at lower prices.
Report a correction or typo
Related topics:
automotiveauto industrycar tech gadgetsvolkswagenauto newselectric vehicles
Copyright © 2021 KABC-TV. All Rights Reserved.
More Videos
From CNN Newsource affiliates
TOP STORIES