Portion of rain-soaked hillside slides onto Highway 39 in Azusa, trapping vehicle in mud 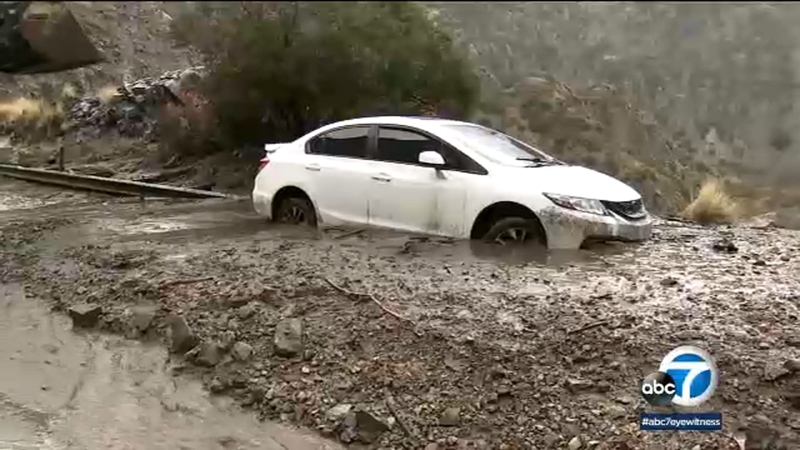 AZUSA, Calif. (KABC) -- A storm that swept across Southern California Friday caused some problems for people living near burn scars in foothill communities of the San Gabriel Valley.

In Azusa, a motorist managed to escape injury when a portion of a rain-soaked hillside slid down to Highway 39, pushing the car across the roadway.

Police closed the roadway to all traffic at Old San Gabriel Canyon Road so crews could remove the muck from the roadway. An estimated reopening time was not clear.

The incident happened around 6 a.m. in an area that burned in the Ranch Fire last August, which left the hillsides barren of any vegetation to hold it intact.

At first, the area was saturated with water and residents say there was only some mud at first before it became a much bigger flow. Many who live in the area say that's always a risk when it rains.

"This morning at 5 a.m. when I came down there was just some rocks on the road. But outside of that, this is normal. If you're going to live up there, this happens," said Azusa resident Jack Coombs. "When the fires were here, we evacuated for a few days, so it's just living up in the wilderness. Nothing to do about it."

By Friday afternoon, the bulk of the steady downpours died down, with showers expected to taper off as the day wears on.

Nearly two feet of snow fell at Mount Baldy, with an elevation of about 6,500 feet, while Mount Wilson saw 7 inches.

"Showers will continue through the afternoon with isolated thunderstorms and brief heavy downpours and small hail," according to the NWS. "Rain rates are expected to remain below critical thresholds for debris flows. The snow levels have fallen to as low as 3,500 feet with light accumulations expected above 4,000 feet."

Forecasters noted that conditions will dry out through the weekend, but another storm system could arrive by Tuesday.