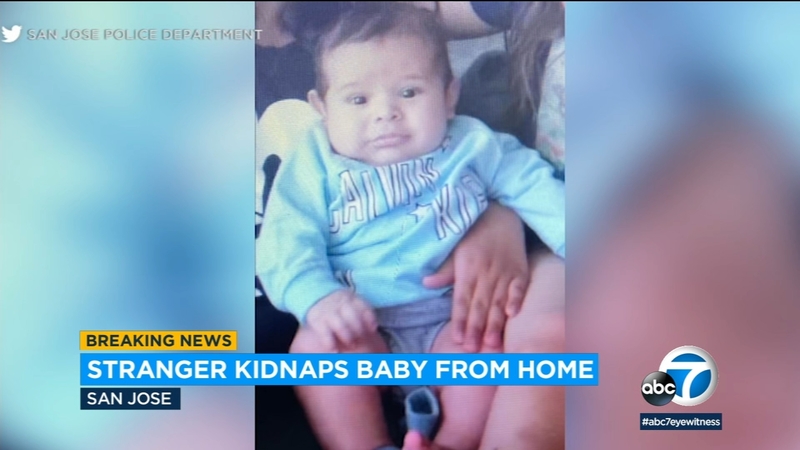 SAN JOSE, Calif. -- A suspect caught on video taking a baby boy from his San Jose apartment kidnapped the infant while his grandmother was unloading groceries, police said in a press conference Monday.

Police say the boy's grandmother who had been watching him while his mother was at work, called around 1 p.m. to report the child had been taken. They say she took 3-month-old Brandon Cuellar inside a bedroom while she was unloading groceries from her car. In a matter of a few minutes, the infant was taken and gone, according to police.

Officers say the grandmother did not see the suspect enter the apartment.

Police released a video clip that shows the man walking down the sidewalk holding a baby carrier covered by a white blanket.

An SJPD official gave an update on the search for a 3-month-old boy that was allegedly kidnapped outside his home Monday.

San Jose police says the child's father is incarcerated and out of the picture.

Police say no Amber Alert was called due to the lack of suspect vehicle information. FBI Child Abduction Response Team is now involved in the investigation and every resource is being used to find Cuellar.

"Today, someone's walking around with a child they didn't have yesterday," SJPD Sgt. Christian Camarillo said.

A cash reward is being offered in return of the infant.

SJPD tweeted out images of the suspect. They say the male suspect entered a residence in the 1000 block of Elm Street and left with the infant in the carrier.

Officers are currently working this incident. The male you see in these images captured from a surveillance camera entered a residence in the 1000 block of Elm St.

He left with a 3 month old baby. The family does not recognize this suspect. pic.twitter.com/BJ0R44JOP2

The suspect is described as having short hair and wearing a grey baseball hat and a black face mask, with black pants with a dark blue shirt. The family tells police they don't recognize the suspect.

The baby carrier is black in color with a white blanket.

Officers say the 3-month-old's name is Brandon Cuellar, and is he wearing a white long sleeve onesie with dinosaurs on it. The baby carrier is black in color with a white blanket.

3/ The baby is Brandon Cuellar, 3 months old. He was wearing a white long sleeve onesie with dinosaurs on it. pic.twitter.com/qMVUOmW8Oo