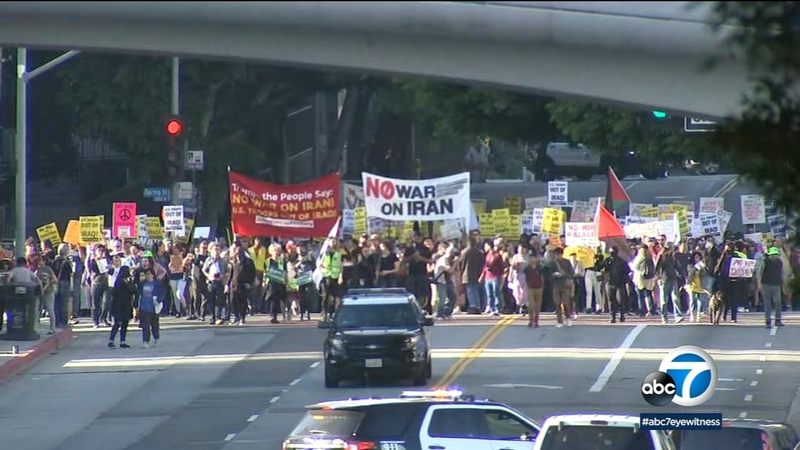 DOWNTOWN LOS ANGELES (KABC) -- Hundreds of protesters rallied and marched in downtown Los Angeles on Saturday afternoon, voicing their opposition to war with Iran days after a top Iranian military commander was killed in a U.S. airstrike in Baghdad.

The ANSWER Coalition, Code Pink and Veterans for Peace organized the 1 p.m. rally at Pershing Square, calling for an immediate withdrawal of U.S. troops from the Middle East.

"If Iran openly assassinated a top U.S. general and bragged about it, there is no question that the United States would initiate full scale war," said Brian Becker, ANSWER's national coordinator. "Trump and the Pentagon have acted illegally, in violation of the Constitution, the War Powers Act and international law."

Meanwhile, Los Angeles police and the county sheriff's department said they continued to monitor events in the Middle East, adding that there was no credible threat to the Southland.

MORE: Iranian general killed: What Americans should know about US airstrike
EMBED More News Videos
"We will continue to communicate with state, local, federal and international law enforcement partners regarding any significant intel that may develop," the LAPD said in a statement. "This department is committed to ensuring the safety of our vibrant and diverse community, and we ask every Angeleno to say something if you see something."

Sheriff Alex Villanueva noted that "nearly every nationality in the world can be found in the county of Los Angeles. Keeping all residents and visitors safe is always a top priority."

Iran has vowed harsh retaliation for the U.S. airstrike ordered by President Donald Trump that killed Gen. Qassem Soleimani, the head of Iran's elite Quds Force and mastermind of its regional security strategy, and several senior Iraqi militants. The attack has caused regional tensions to soar, raising fears of an all-out war, and tested the U.S. alliance with Iraq.

Trump says he ordered the strike, a high-risk decision that was made without consulting Congress or U.S. allies, to prevent a conflict. U.S. officials say Soleimani was plotting a series of attacks that endangered American troops and officials, without providing evidence.