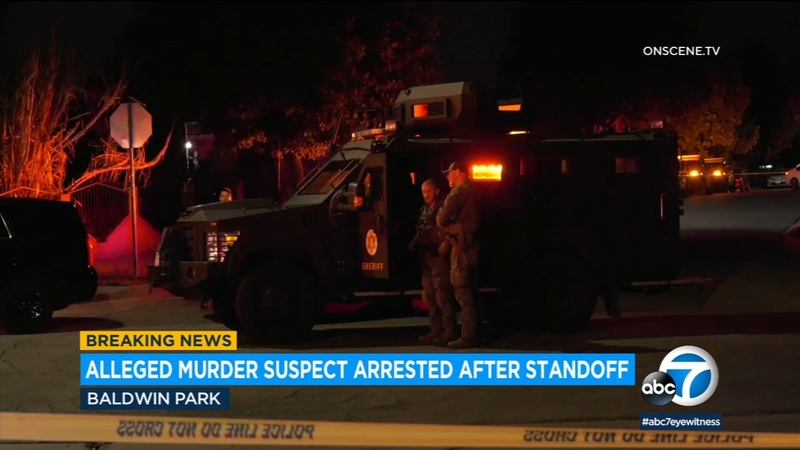 BALDWIN PARK, Calif. (KABC) -- A 27-year-old man suspected in the bludgeoning death of a 70-year-old woman was taken into custody Thursday morning by a Los Angeles County Sheriff's Department SWAT team after he barricaded himself inside a Baldwin Park home for more than six hours.

Officers from the Baldwin Park Police Department responded about 9:40 p.m. Wednesday to a call of a man attacking someone with a stick in the 3000 block of Mangum Street, near Frazier Street, according to Deputy James Nagao. There were also reports of a man vandalizing the property and breaking windows.

Upon arriving, officers found three victims outside a home, and the 70-year-old woman was unresponsive in the yard and pronounced dead at the scene, Nagao said. He added that two additional victims, a man and woman, were taken to a hospital, where they were treated and released.

Officers were directed to the suspect's residence, a rear house on the property, where the man had barricaded himself inside. A sheriff's department SWAT team was sent to the scene, along with crisis negotiators, Nagao said.

About 4:30 a.m., the department announced the suspect was in custody after a special tactic team negotiated with him and eventually deployed tear gas into the residence. The suspect was taken into custody by the help of a K-9 unit.

The man, who has not been identified, was booked for murder by Baldwin Park police.

A motive for the killing was not disclosed.

The name of the victim, identified as a family friend, was not immediately released.