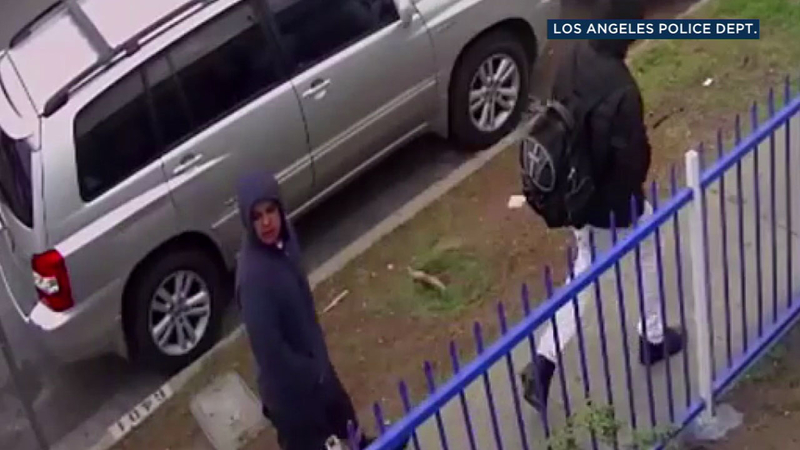 Their silver Porsche Cayenne has a luggage rack, tinted windows, black rims and no license plates.

The two suspects were caught on surveillance footage on Feb. 10. They are seen approaching a victim seated in the passenger seat of his car parked on 64th and San Pedro streets.

Police said the suspects pointed a gun at the victim, forced him out of the vehicle and took his wallet and cellphone. Dennis Larry, who works at a nearby liquor store, said the bold suspects have put him on edge.

"It happened in the morning time and there are kids and families all around this area. It makes me nervous" he said.

The Porsche bandits, police said, are responsible for numerous robberies in South Los Angeles. Many residents said the crime in the area makes them feel like prisoners in their own homes.

"I do have a fear in me when I go outside," Josue Santilla said. "We can't do anything with our younger brothers. We can't take them outside to catch a ball"

While the number of homicides are down in Los Angeles, violent crimes such as robberies increased last year.

Police released a clear picture of one of the suspects. He is described as a man between the age of 18 to 23 years old, 5 feet 5 inches tall and weighing between 150 to 200 lbs.

Police are asking the public to pay attention to their surroundings and not travel alone as the suspects appear to target victims who are by themselves.
Report a correction or typo
Related topics:
south los angeleslos angeles countytheftporscherobberyluxury vehiclesarmed robberysurveillance video
Copyright © 2021 KABC-TV. All Rights Reserved.
More Videos
From CNN Newsource affiliates
TOP STORIES