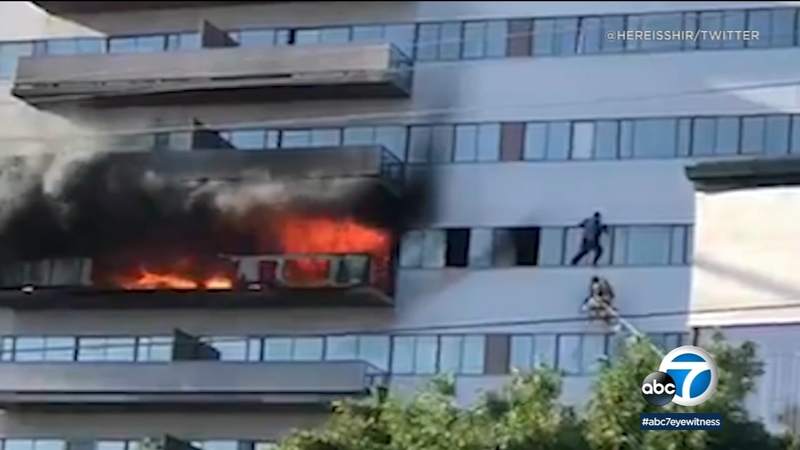 LOS ANGELES (KABC) -- The firefighters who grabbed a man who was hanging to the side of a burning West Los Angeles high-rise say there was a desperate scramble to reach him before he fell or jumped.

"We went in with a risk vs. gain policy of risk everything to save everything," Los Angeles Fire Department firefighter David Gastelum said.

The 30-year-old man was still in critical condition Thursday, one day after the fire at the Barrington Plaza apartment complex, suffering from burns and smoke inhalation. Another man from the seventh floor unit where the fire began is in grave condition.

Firefighters say because of stairs, planters and other obstacles on the ground, they had a hard time getting their ladder truck close enough to the man who was standing precariously on a narrow ledge.

"The guy had superhuman powers," said firefighter Garrett Boccarro, who climbed the ladder to reach the man. "He was on that ledge (which was) about a quarter inch, half an inch, and he was there for a good amount of time."

Fire officials say the 25-floor tower has no sprinkler system. It was built in 1961 and sprinklers were not mandated until 1974.

After Wednesday's fire, and a similar one at the same building in 2013, L.A. City Councilman Mike Bonin's office says he will introduce a proposal to require all high-rise buildings to have sprinkler systems.

The Barrington Plaza tower was last inspected by the fire department in June 2019. The cause of the fire has not been determined, though arson investigators have wrapped up the scene.