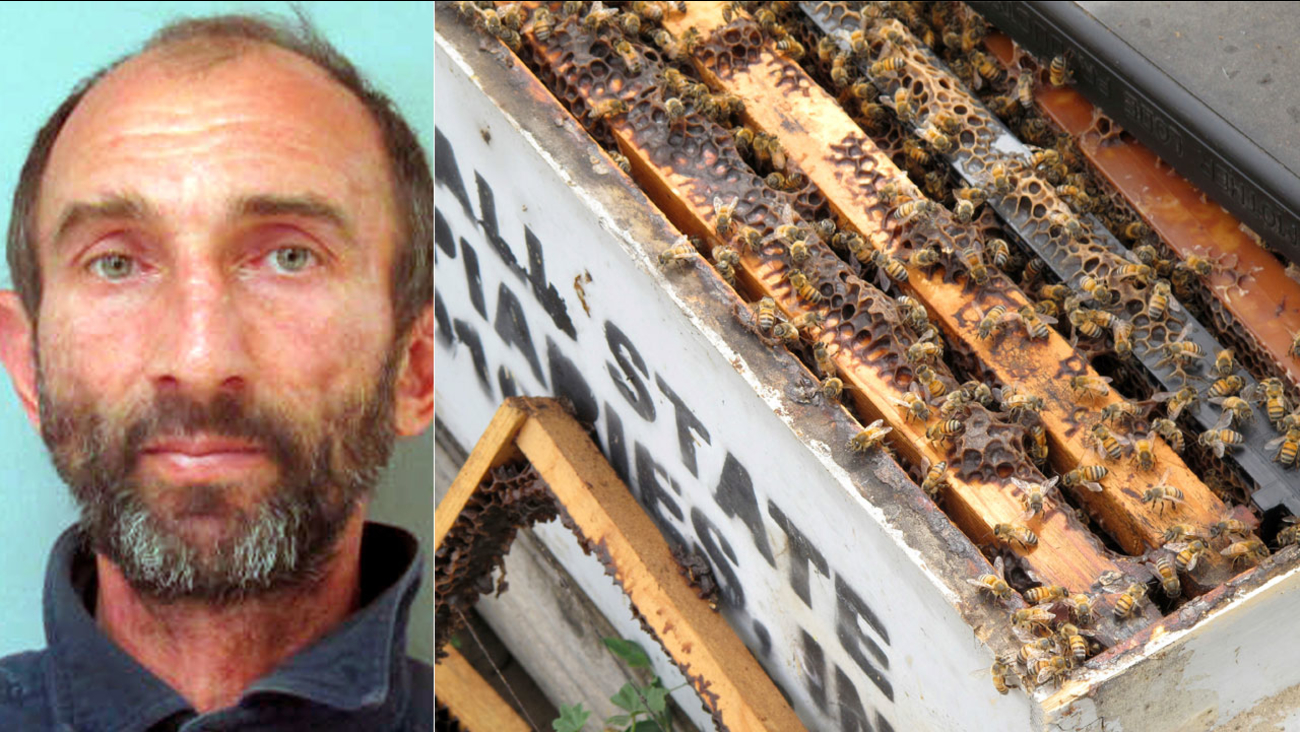 This undated photo, left, shows Pavel Tveretinov. Several of the thousands of recovered beehives stolen in California are shown in this May 16, 2017, photo near Sanger, Calif. (Fresno County Sheriff's Office via AP/AP Photo/Scott Smith)

FRESNO, Calif. -- The bee industry is buzzing over the arrest of a man accused of stealing thousands of hives worth nearly $1 million from California's almond orchards in one of the biggest such thefts on record.

The case has thrown a spotlight on a business many city slickers probably never knew existed: Beekeepers in the U.S. move their colonies around the country by truck and rent them out to farmers to pollinate their flowering crops.

In California, which relies on bees brought in from such places as Missouri, Montana and North Dakota to produce more almonds than any other place in the world, hives began to vanish overnight across several counties three years ago.

The break in the case came in late April, when a tip led authorities to a ramshackle "chop shop" of stolen beehives on a corner lot outside Fresno. They arrested 51-year-old Pavel Tveretinov, a beekeeper-turned-criminal from suburban Sacramento, on suspicion of possessing stolen property, investigators said.

The unexplained mass die-offs of bees in recent years and booming demand for almonds have helped drive up the value of hives.

Almond growers rent hives for a few weeks when their trees blossom, allowing the bees to pollinate the flowers as they fly from tree to tree. The blossoms then turn into nuts.

Investigators say Tveretinov, the prime suspect in the thefts, went to work at night, removing the hives when the bees are dormant.

One of the biggest single thefts came in January, when more than 700 hives vanished from two orchards north of Sacramento. They were recovered in Fresno, more than 200 miles to the south.

In total, Tveretinov is responsible for stealing 2,500 hives and equipment worth $875,000, investigators say.

He was released on $10,000 bail after his arrest April 28. A telephone number for him could not be found. It was not clear whether he had an attorney who could comment on the charges.

The tip came from a beekeeper who needed a place to store his hives and came across the lot used by Tveretinov. There, the beekeeper recognized hive boxes belonging to a friend of his in Missouri who had fallen victim to theft, said sheriff's Detective Andres Solis.

Beekeepers customize their boxes to make them unique, imprinting identification numbers and painting them different colors with their logos.

Investigators showed up at the lot and found Tveretinov at work amid a field of mismatched hive boxes.

"It's like a chop shop for beehives," Solis said. "They're scattered all over the place."

Investigators asked California beekeeper and almond farmer Ryan Cosyns to help sort through the case. He said it was obvious that Tveretinov had sloppily painted over the boxes with his own brand and used a grinder to remove identification numbers.

"The average person isn't going to be able to look at a box and realize it was stolen," Cosyns said. "Or they're renting at a price where nobody is asking any questions."

Beekeeper Yelena Storojenko of Colusa County, who has now recovered some damaged hives filled with dying bees, estimated her family's business lost $200,000 in rental income, equipment and queen bees, which are necessary for breeding. Each hive is rented out for $175.