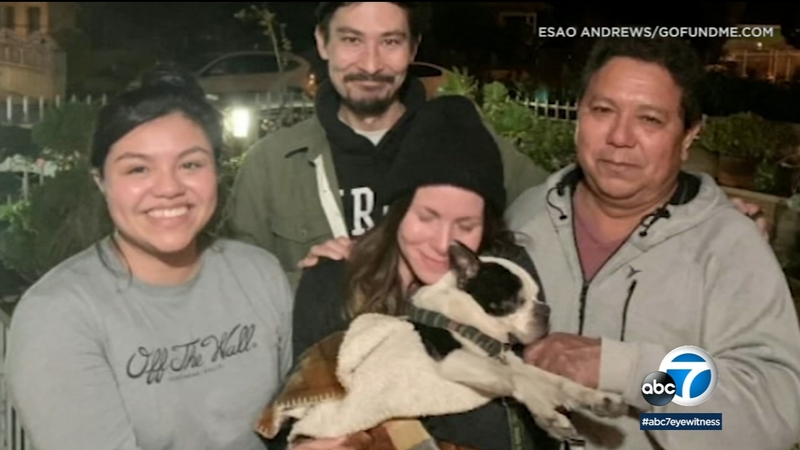 LOS ANGELES (KABC) -- A 16-year-old deaf Boston Terrier with one eye was found on New Year's Eve after being stolen in mid-December.

The pup named Soybean was taken from his owners' vehicle parked in the Silver Lake area on Dec. 15. The owners said the dog was sleeping peacefully in the backseat and they didn't want to disturb him when they went into a restaurant.

"We didn't think we were going to see him again because of his age," said Esao Andrews, one of Soybean's owners.

Soybean is also deaf and has trouble walking due to arthritis.

His owners, Andrews and Clare Herron, put out flyers and even offered a $5,000 reward in hopes of finding him.

"I feel something for him. I picked him up, put him in my truck. But he was so dirty and kind of sick," said Ricardo Enriquez Torres.

Torres discovered the little dog shaking in an alley 12 miles away from his home on Tuesday. He took him home to his family in South Los Angeles.

"We fed him and gave him water. Honestly, I thought he was a little bit sickly because he wasn't happy," said Cassandra Enriquez-Morales.

Torres' daughter, Cassandra, said she found his tag hidden under his harness. She called the number and sent a photo.

"We were like, that's him! It was the most exciting moment of my life. We just jumped in the car and went straight there," Herron said.

The reunion included hugs all around, for Soybean and his rescuers.

A vet later examined Soybean, who his owners say was dehydrated and had lost weight but otherwise seems to be OK.

As for the reward, the family turned it down.

"I don't think I did too much to take that money," Torres said.

Andrews said the money was instead dispersed to a couple of local shelters and people who helped in the search.

"We feel like he's given a lot of people hope today," Herron said. "He's just brought so much joy to so many people who never knew him, just through his story."

Soybean's owners were so grateful, they started another GoFundMe with the money raised going toward helping the Torres family.

Cassandra calls it a game-changer as it's a chance to return to school.

"Starting next school year, I'm back in the game. So thank you guys very much and I want to thank the community as well. It was a team effort and I'm very grateful," she said.