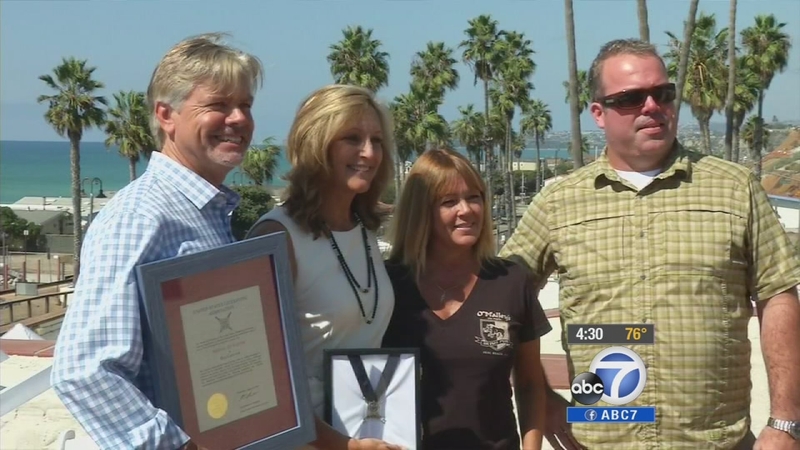 SAN CLEMENTE, Calif. (KABC) -- The Newport Beach lifeguard who drowned while attempting to save a swimmer is the first to be posthumously awarded with a medal of valor, the highest honor for lifeguards.

Ben Carlson's parents Chris and Terry accepted the award Thursday from the United States Lifesaving Association in his name.

"It's so appreciated by our family," father Chris Carlson said. "It's really helped to ease the pain of a very bad event on July 6."

The 32-year-old was overcome by a wave in July during a rescue attempt. Although the swimmer in distress made it back safely, Ben Carlson did not.

A week after his death, thousands gathered to honor the lifeguard at a paddle-out and memorial service.

On Thursday, his sacrifice was honored with the medal of valor. Only 41 people have received the award.

His family says the 15-year veteran lifeguard would have been shocked.

"I don't know how he would've taken it to be honest, probably a little bit of disbelief that so much attention's been paid to it," Chris Carlson said.

While his family and friends continue to honor his memory, lifeguards hope this tragedy reminds people to stay safe when in the ocean.

"We wish he was still here, but we're hoping people understand the dynamics of oceans and what lifesavers do," Newport Beach lifeguard Rob Williams said.

That's part of the reason his family started the Ben Carlson Memorial and Scholarship Foundation. The organization is geared towards improving water safety and carrying out Ben's legacy of saving lives.

"We can never say thank you enough. What he did, saving that person's life, was amazing. We just wish he was here to celebrate with us," said Mike Beuerlein, president of the California Surf Lifesaving Association.

The Ben Carlson Memorial and Scholarship Foundation has raised more than $50,000 in just a few months.