After his dog's popular Instagram account was hacked, Andrew Laske is spreading awareness about cybersecurity threats.
KABC
By Marc Cota-Robles 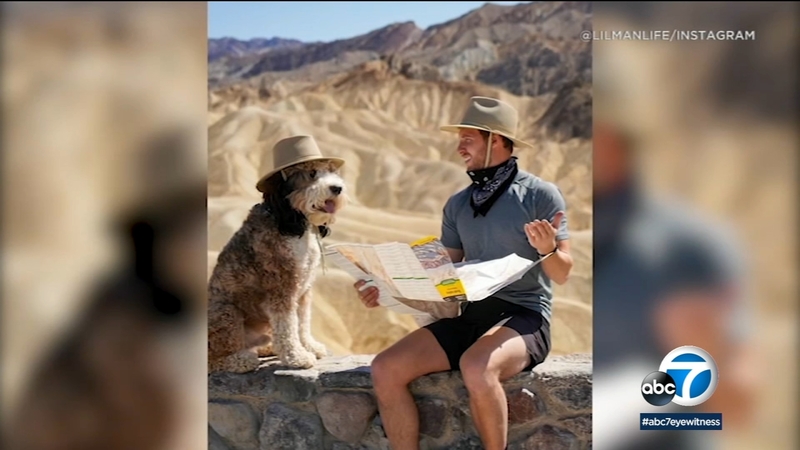 SANTA MONICA, Calif. (KABC) -- An owner and his therapy dog who appeared in a viral social media video earlier this year are spreading awareness about cybersecurity threats after being targeted by a hacker.

In May 2020, shortly after being featured on ABC7, Andrew Laske's viral account @lilmanlife was held for ransom. Laske had been locked out. Soon after, the account was permanently deleted.

"I don't know if I've ever been so anxious, so helpless in my entire life," Laske told Eyewitness News.

The account had recently gone viral following a post of Andrew rollerblading with his 70 pound bernedoodle, Benji, on his back. Additional posts had Benji enjoying other high-adrenaline activities, including skiing and off-roading in the desert.

"It's crazy how comfortable he is with all of these things," said Laske. "Maybe in a past life he was a rockstar."

In the world of viral pet videos, Benji may be worth his estimated 20 million views.

"They don't even have a number to call," a frustrated Laske told us.

Karen North, professor of social media at USC's Annenberg School, told Eyewitness News she is not surprised, saying the platforms "usually do not help."

North is warning other users of the inherent risk when depending on social media sites to secure your digital property, especially when a lot of time and potentially money is invested.

"We're not really in control of it, the platform is," said North.

"That's not how things should be, that's not how a big company like this should be run," said Laske, who actually traveled to San Francisco to Facebook headquarters following the hack to find answers.

Along with cool photos and videos, Benji and Andrew volunteer by visiting sick children at Children's Hospital L.A. The Instagram page had been a fundraising tool for those efforts. Most recently the hospital visits have been in a virtual setting due to COVID-19.

Temporarily defeated, Laske and Benji haven't given up. They're back to posting on Instagram after starting up a new account under the same name.

This time, they have enabled two-factor authentication for password security, which is recommended by experts.

"Taking the extra minute to use those measures is one step closer to protecting your page," says North.

Within two months, Laske and Benji have reached more than 10,300 followers. While they haven't hit viral status like before, their mission to help others remains the same.