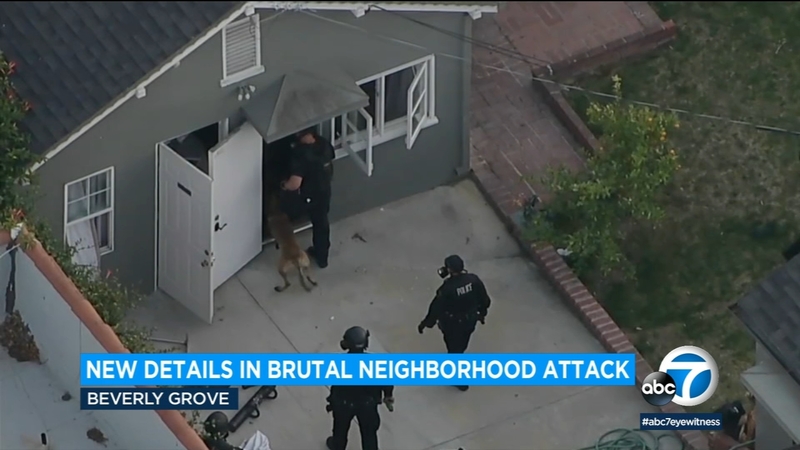 BEVERLY GROVE, LOS ANGELES (KABC) -- New details are being revealed in the disturbing stabbing that left one man dead in a Beverly Grove neighborhood.

Los Angeles police officers were called to investigate a burglary suspect and arrived to find a man stabbed to death in his backyard around 4:35 p.m. in the 6600 block of Maryland Drive Monday.

Neighbors identified a potential suspect climbing through yards. That man was eventually located in a nearby home.

He was found dead due to a self-inflicted stab wound. On Tuesday, police confirmed that man was the suspect in the original stabbing.

Detectives are now trying to determine what led to the violent attack. LAPD said they believe the fatal stabbing is an isolated incident.

Residents are angry and on edge after the apparent random attack. They say city leaders have not taken appropriate action.

"This is a neighborhood of families and to get no response from the councilman, I'm sorry, it's unacceptable," said Beverly Grove resident Nicole Cox.

Witnesses described the man who was jumping from yard to yard as homeless and belligerent. Many in the neighborhood are concerned he came from a growing encampment a few blocks away.

Residents say they've been trying for months to get help from Councilman Paul Koretz's office with the nearby encampment, but to no avail.

His office says they are working with all agencies to secure the area.

"We are at this moment coordinating and collaborating with the Los Angeles Police Department and relevant agencies in order to make sure that we have the appropriate deployments into the area," said Gregory Martayan, the director of public safety for Paul Koretz's office.

This is the third deadly random attack in recent weeks in L.A. County.

A woman and her dog were stabbed to death in San Dimas last week. A 47-year-old Santa Barbara man is facing a murder charge in a violent attack on an elderly Encino man that happened March 18.