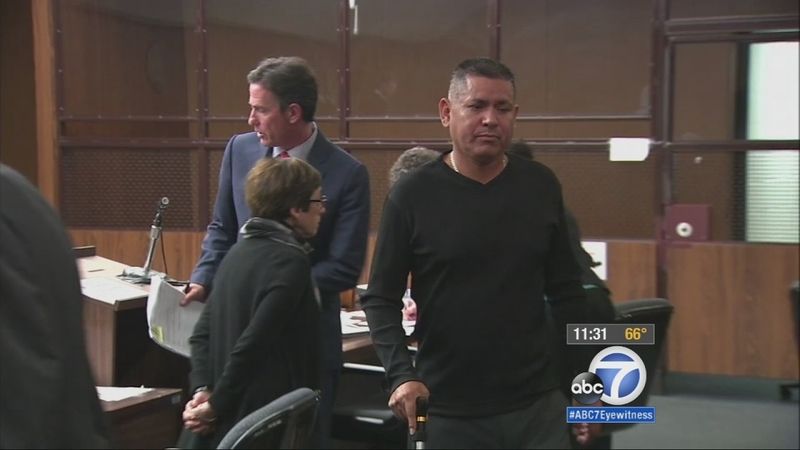 SAN FERNANDO, Calif. (KABC) -- A dump truck driver accused in the death of an LAPD officer in Beverly Hills last year made his first court appearance on Friday.

Robert Maldonado is charged with gross vehicular manslaughter in the death of 40-year-old Officer Nicholas Lee.

Last March, Lee and his partner were in their police cruiser at the intersection of Loma Vista Drive and Robert Lane in Beverly Hills when their vehicle collided with a dump truck, which had lost its brakes. Maldonado was behind the wheel of that truck.

The patrol car was nearly demolished. Lee was pronounced dead at the scene and his partner was transported to an area hospital with injuries. She was expected to recover.

Maldonado, 46, stood before a Los Angeles County Superior Court judge in San Fernando Friday morning. His arraignment, though, was delayed.

According to the district attorney, Maldonado was arrested just three weeks ago following an investigation conducted by the California Highway Patrol.

The Pacoima resident was not only driving the truck, he also owns the dump truck company, prosecutors say.

The CHP investigation determined that the truck's brakes failed because Maldonado did not properly maintain and inspect the truck, as required by his carrier permit.

"That's a touchy issue to me, but that's exactly their focus point, that my client did not maintain his vehicle in a proper and prudent manner, and therefore it amounted to gross negligence and that's why they filed these serious charges against him," said Andrew Flier, Maldonado's attorney.

Maldonado, who has posted bond, is using a cane to walk.

Flier said there could be unfair circumstances in this case. He believes the charges were filed solely because the victim was a police officer.

"It's unfortunate because we don't want anyone hurt on the roads, and I think everyone should be treated equally. I just think that maybe a little more pressure is why they filed this case than the average case that would have come before them," Flier said.

If convicted, Maldonado faces up to six years in state prison. He is due back in court on April 28.