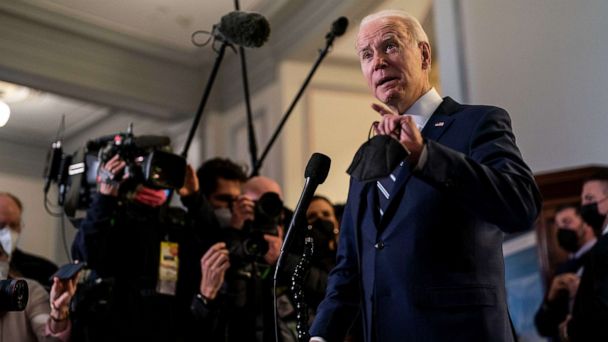 Amid a setback on voting rights and a stalled economic agenda, President Joe Biden on Friday sought to highlight progress his administration has made on implementing the bipartisan infrastructure law passed in November, announcing nearly $27 billion in investments to repair and replace the nation's crumbling bridges.

The Department of Transportation launched the Bridge Replacement, Rehabilitation, Preservation, Protection, and Construction Program, which will provide $26.5 billion to states, the District of Columbia and Puerto Rico over five years and $825 million for tribal transportation facilities.


"The Biden-Harris Administration is thrilled to launch this program to fix thousands of bridges across the country -- the single largest dedicated bridge investment since the construction of the Interstate highway system," Transportation Secretary Pete Buttigieg said in a statement. "Modernizing America's bridges will help improve safety, support economic growth, and make people's lives better in every part of the country -- across rural, suburban, urban, and tribal communities."

"This is an investment that's going to help connect entire towns and regions to new opportunities. With this investment, we're sending a message to those communities and to the people who call them home: You matter. We're building back and building back better with you. We're making sure you're not left behind and left out," Biden said in remarks Friday afternoon.

The president also spoke about the progress he said the administration has made in the 60 days since he signed the bill into law, touting billions of dollars for modernize highways, ports and action to strengthen supply chain issues, as well as expanding access to broadband internet access, and addressing health impacts and climate change with the investments.

The remarks comes amid a tough week for Biden, after efforts to pass major voting rights legislation have hit a road block in the Senate, and the Supreme Court dealt a blow to his COVID response efforts, blocking a vaccinate-or-test mandate for large companies.

"There's a lot of talk about disappointments and things we haven't gotten done," Biden said. "We're gonna' get a lot of them done, I might add, but this is something we did get done. And it's of enormous consequence to the country."


Across the country, the bridge funding is expected to help repair approximately 15,000 highway bridges, and will be allocated to each state according to a needs-based formula -- though the choice of which projects are undertaken are left up to the states.

While the funding for fiscal year 2022 is being released immediately, states will learn their funding totals for the full five years of the program in order to plan ahead, a senior administration official told reporters.

"As part of this announcement, the Federal Highway Administration will distribute $5.3 billion to states, D.C. and Puerto Rico for the current federal fiscal year, along with $165 million to tribes," the official said.

Some of the states set to receive the most funding include Pennsylvania, Illinois, California and New York.

In addition to providing funds to states to replace and repair highway bridges, the program has dedicated funding for "off-system" bridges, which are often locally owned and not part of the federal highway system.


"While states generally must match federal funding with up to 20% state or local funding, the bipartisan infrastructure law allows the use of federal funds to pay for the entire cost -- 100% of the cost -- of repairing or rehabilitating locally owned off-system bridges," the official stressed.

"The department encourages governors and states to take advantage of this incentive to make their federal dollars go further by focusing on local bridges," they added.

While the program is slated to help repair thousands of bridges across the country, the administration is also seeking to use the program to increase resiliency when it comes to climate change, as well as make bridges safer for cyclists and pedestrians.

Pressed on how the administration planned to enforce its desire to focus funds on repairs for existing bridges, and emphasizing equity when new bridges are constructed, particularly in Republican-run states, the official brushed off the concern.

"Bridges in general are neither red nor blue. They're an important piece of infrastructure in communities," the official said. "And the state transportation departments have a good track record of investing in bridges based on the condition of those bridges. And we're confident that with these funds and with the guidance we've provided and with the conversations that we've been having with them, they're going to be directing the funds to the bridges that are in most need of repair."
Report a correction or typo
Related topics:
abc newsnational
Copyright © 2022 ABC News Internet Ventures.
TOP STORIES
Man who sparked probe into Kobe Bryant crash photos speaks out
Free N95 masks arriving at pharmacies as early as Thursday
Shooting on 5 Freeway in Sylmar leaves driver wounded
Kaiser to be sued after mom of 3 denied COVID shot dies, lawyer says
Toddler credited with saving family of 7 from devastating house fire
Biden confirms he will nominate first Black woman to SCOTUS
Portola HS principal condemns racist taunts hurled at basketballer
Show More
Robbery victim recounts theft of $15K watch after fender-bender
Bay Area jewelry store owner confronts smash-and-grabbers
NatGeo debuts 'Into the Depths' podcast on search for slave shipwrecks
OC DA Spitzer focuses on LA County policies in reelection campaign
Wind advisory in effect until Friday for parts of SoCal
More TOP STORIES News