Biden blasts Trump over reports he downplayed coronavirus threat: 'It's a disgrace' 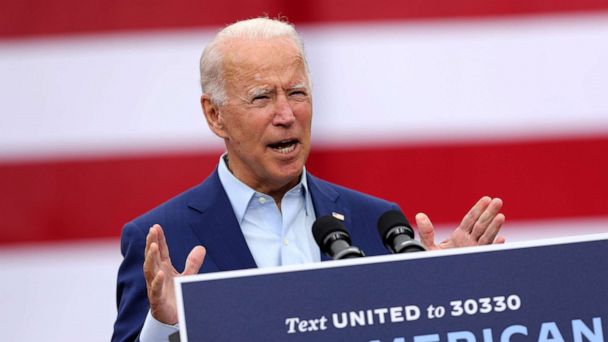 Campaigning in Michigan on Wednesday, former Vice President Joe Biden excoriated President Donald Trump over reports that in an interview with journalist Bob Woodward he admitted to deliberately minimizing the seriousness of the novel coronavirus to the public despite understanding its true danger.

"[President Trump] knew and purposely played it down. Worse, he lied to the American people. He knowingly and willingly lied about the threat it posed to the country for months," an angry Biden said Wednesday in Warren, Michigan, at the top of a speech focused on the economy.


"He had the information. He knew how dangerous it was and while this deadly disease ripped through our nation he failed to do his job on purpose. It was a life and death betrayal of the American people," Biden added.

Speaking from the White House on Wednesday afternoon, Trump also reacted to the reporting in Woodward's book, defending his comments by saying he did not want to "create panic" over the virus.

Biden, continuing a recent campaign blitz through the Midwest, cast Trump's position laid out in comments to Woodward for his book, as reported by CNN and The Washington Post, as contributing to the economic devastation wrought by the coronavirus and as a "dereliction of duty."

"His failure has not only cost lives, he's sent our economy in a tailspin, and cost millions more in American livelihoods," Biden said. "It's beyond despicable. It's a dereliction of duty. It's a disgrace."

ABC News has not obtained copies of Woodward's book or the audio recordings and could not independently confirm the reports. The book is titled "Rage" and scheduled to be published next Tuesday.

Just prior to Biden's remarks, White House Press Secretary Kayleigh McEnany attempted to deny that the president has ever played down the virus, arguing instead that he "expressed calm" despite Trump reportedly telling Woodward on March 19: "I wanted to always play it down. I still like playing it down, because I don't want to create a panic."

"The president has never lied to the American public on COVID. He was expressing calm," McEnany said Wednesday.


Beyond his comments on Woodward's reporting, Biden's remarks in Michigan on Wednesday centered around his plans to juice the American manufacturing sector by encouraging the purchase of goods made in the United States and discouraging companies from offshoring and outsourcing jobs, a phenomenon Biden said is a result of Trump's "broken promises" to workers.

"He's failed our economy and our country. But look, did you really expect anything different from this guy? From someone who called those of you and those who are serving in uniform, who have given their lives to the country losers and suckers?" Biden asked, referring to a report in The Atlantic last week said Trump had made disparaging remarks about members of the military. Trump has strongly denied the veracity of the report.

"Donald Trump doesn't understand what it means to serve something bigger than yourself. He doesn't understand duty, honor, country. He lives by different code: lies, selfishness, greed. Yes, Donald Trump and I have a pretty different philosophy when it comes to giving our word. Mine means something. When I tell the American people I'm going to do something I follow through," Biden added.

Part of that speech included the unveiling of a new policy proposal aimed at incentivizing companies to produce goods in America through a 10% tax credit and discouraging them from outsourcing and offshoring American jobs by imposing a new 10% surtax on companies that ship those jobs overseas.

"I'm not looking to punish American business, but there's a better way. Make it in Michigan, make it in America, invest in our communities and the workers in places like Warren. That's what this is about. UAW workers, Steel Workers IBEW workers," Biden said, laying out his new economic policy.

"I don't accept the defeatist view that the forces of automation and globalization mean we can't keep good paying union jobs here in America, and create more of them. I don't buy for one second, that the vitality of American manufacturing is a thing of the past," Biden added.

The trip comes as Biden attempts to chip away at what has been a consistent and rare bright spot for Trump in the polls: his handling of the economy. A recent poll from Quinnipiac University shows the two candidates tied when it comes to who voters trust more to handle the economy, a departure from voters' views on who can best handle the coronavirus pandemic and racial inequality. On those issues, Biden is favored.


Wednesday's visit marked the first time Biden has stepped foot in Michigan since officially becoming the Democratic Party's nominee and the fourth time in the last 10 days the former vice president has made stops in the Midwestern battleground states that comprised the much-heralded "Blue Wall" of states that fell to the GOP in 2016.

Both Biden and Trump made visits to Wisconsin last week, making drastically different stops in the city of Kenosha, which has been rocked by protests in the wake of the shooting of Jacob Blake, a Black man, by a police officer. The two candidates have also zeroed in on the state of Pennsylvania in recent days, with Biden giving a speech in Pittsburgh last week and making a Labor Day stop in the central part of the state, while Trump held a rally in Latrobe, roughly 40 miles east of the Steel City.

But Biden's stop in Michigan today was nothing like the last time he visited the critical battleground state in March, when he rallied in Detroit with his future running mate, Sen. Kamala Harris, just days before the COVID-19 pandemic halted in-person campaigning.

Five months later, Biden made another targeted, but socially distanced, campaign stop in Macomb County, an area just north of Detroit, rich with the kinds of voters that strayed from Democrats in 2016 and helped deliver Trump the White House.

Advisers to the former vice president made clear that while his campaign travel is likely to increase in pace in the coming days, the candidate will not be holding large events similar to those Trump has held in recent days, events they feel may threaten public health.

"You'll never see the Vice President with a big large crowd without people with masks, because it's just not safe and every expert in the country has said that," Biden's campaign manager Jennifer O'Malley Dillon told reporters last week.

On Wednesday afternoon, Biden's campaign announced that he is heading to the battleground state of Florida next week, his first visit there since securing the Democratic presidential nomination.
Report a correction or typo
Related topics:
abc newsnational
Copyright © 2020 ABC News Internet Ventures.
More Videos
From CNN Newsource affiliates
TOP STORIES