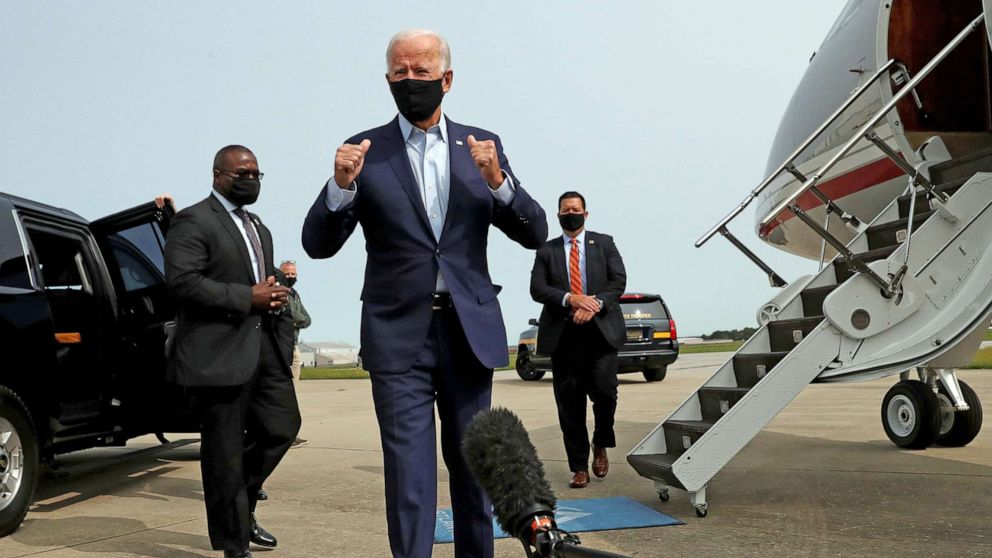 Just weeks ahead of Election Day, former Vice President Joe Biden's campaign unveiled a slate of five new ads, including a spot utilizing a veterans' testimony to slam President Donald Trump over alleged comments he made about fallen U.S. soldiers.

The ads -- which were released Thursday -- attack Trump, who, according to an article published last month in The Atlantic magazine, called U.S. soldiers that have died in war "losers" and "suckers." One ad features U.S. Army veteran Sgt. 1st Class Paul Cruz, who personally conducted military funerals during a portion of his time in the military.

"President Trump just doesn't understand... To think that somebody would call them suckers and losers. It's incredibly disrespectful to every person who's ever worn that uniform, to every person who was the child or mother, father, brother," Cruz says in the ad, which the campaign said will be specifically targeted towards Latinos and veterans.

Trump has vehemently denied making the comments alleged in The Atlantic report, and ABC News has not independently confirmed the story, which cites four unnamed sources with direct knowledge about the claims.

The other four ads released by the Biden campaign on Thursday offer a range of familiar messaging on issues including the economy, health care and protecting Social Security.

"Trump has failed the American farmer," Rick, a family farmer from western Pennsylvania that the campaign has featured in a previous ad, says in one of the new spots rolled out Thursday.

"We're going to impose a tax penalty on companies that avoid paying U.S. taxes by offshoring jobs and manufacturing... deliver on the promise to buy America. And we're gonna make it happen with American grit, American determination and American union workers," Biden can be heard saying in another new ad that pulls from a recent speech where he pitches his "Build Back Better" economic plan.

The ads are airing on cable nationally, and in the 16 states the Biden campaign is already up on the air in, including Arizona, Florida, Georgia, Iowa, Maine, Michigan, Minnesota, Nebraska, Nevada, New Hampshire, North Carolina, Ohio, Pennsylvania, Texas, Virginia, and Wisconsin.

The new ads also come as the former vice president continues his travel to a host of battleground states, including Arizona on Thursday and Nevada on Friday, while Trump has remained at the White House recovering from COVID-19, for which he tested positive last week.

Despite his diagnosis, Trump said in an interview on Fox News Thursday evening that he hopes to get back out on the campaign trail as early as this weekend.

"I think I'm going to try doing a rally on Saturday night if we have enough time to put it together, but we want to do a rally probably in Florida on Saturday night. I might come back and do one in Pennsylvania the following night and it's incredible what's going on. I feel so good," Trump told Fox News host Sean Hannity.