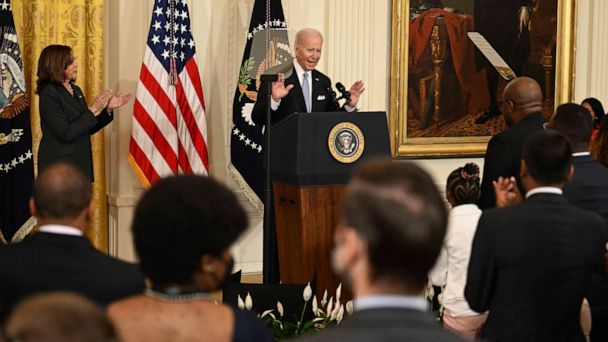 On the second anniversary of George Floyd's death at the hands of Minneapolis police, President Joe Biden on Wednesday signed an executive order on policing reforms for federal law enforcement.

He had made a campaign promise to enact broader reform -- but Democrats in Congress failed to overcome Republican opposition to a measure that would hold local police accountable -- by making federal funding contingent on departments following congressionally-imposed requirements. The order signed Wednesday will apply to roughly 100,000 federal officers total, administration officials said.

Speaking in the East Room surrounded by Floyd's family members, relatives of Breonna Taylor and civil rights leaders, Biden celebrated the order as a "measure of what we can do together to heal the very soul of this nation to address profound fear and trauma exhaustion."

But first, he and Vice President Kamala Harris briefly addressed the shooting that took place Tuesday at a Texas elementary school that left 19 young children and two teachers dead.

"Enough is enough," Harris said. "We must work together to create an America where everyone feels safe in their community, where children feel safe in their schools."

Biden, who confirmed he will be traveling to Texas with first lady Jill Biden in the coming days, called for gun control reform.

"We're here today for the same purpose," Biden said, "to come together and say enough, to act, we must."

The executive order signed by Biden will create a new national database that contains records of federal officer misconduct, including convictions, terminations, de-certifications, civil judgments, resignations and retirements while under investigation for serious misconduct.

It also requires all federal law enforcement agencies to revise use-of-force policies, banning chokeholds and restricting the use of no-knock warrants -- two tactics that were widely criticized following the deaths of Floyd and Taylor.

Floyd died after a Minneapolis police officer knelt on his neck for more than nine minutes. Taylor, a Black medical worker, was shot and killed by Louisville, Kentucky, police using a no-knock warrant in March 2020.

Vice President Harris said Wednesday it was an honor to be joined by the families, stating she's been moved by their courage.

"Your loved ones should be with us today," she added. "You should not have to mourn, should never have had to mourn in order for our nation to feel your pain and to understand what is wrong and to agree that something must be done."