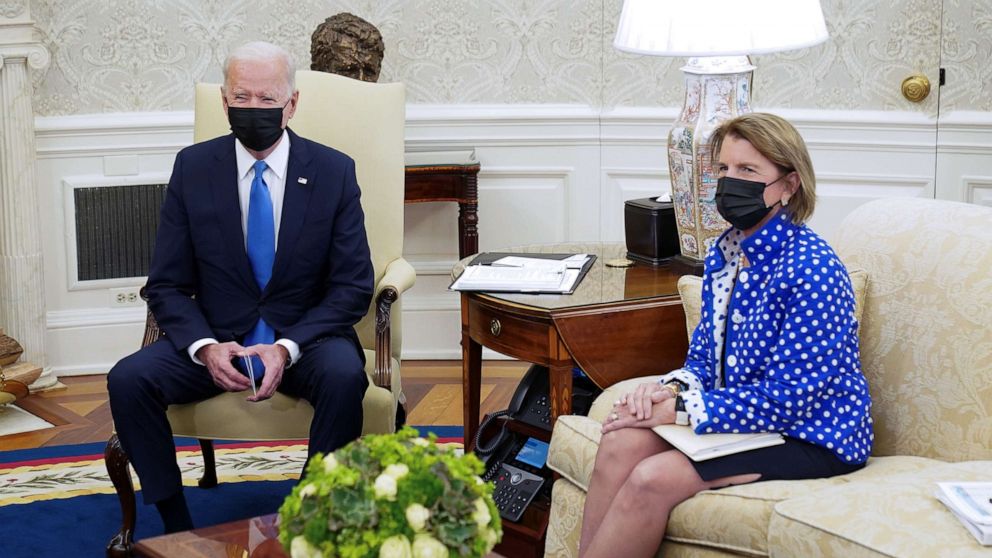 President Joe Biden proposed an infrastructure package worth $1 trillion in new spending that would be funded without raising the corporate tax rate during a meeting Wednesday with the top Republican negotiator on the package.

The new pitch aims to avoid Republican scorn by sidestepping the president's previously proposed corporate tax rate hike. It would instead implement a minimum corporate tax rate of 15%, aimed at some of the most profitable corporations in the country.

The proposal marks a concession on the overall cost of the bill from Biden, whose last pitch was worth $700 billion more.

But Biden has not won over Republicans with this modified tax proposal, a GOP source familiar with negotiations told ABC News.

Republicans have been clear from the onset of negotiations that they do not support raising the corporate tax rate because they do not want to modify former President Donald Trump's signature tax-reform legislation. During a briefing on Thursday, White House press secretary Jen Psaki argued that by raising the minimum rate, the 2017 tax bill would not be altered.

But according to the Republican source, GOP lawmakers see Biden's rejiggered proposal, which includes several other tax modifications along with the 15% minimum rate, as nothing more than a corporate tax hike by another name.

A Republican rejection of the Biden tax modifications would leave the negotiations once again stalled over proposed funding models. The president has been clear that he doesn't support any tax hikes on people making less than $400,000 a year, something Republicans looked to overcome by proposing to raise revenue by repurposing funds from previous COVID-19 relief bills. The administration said those funds aren't as bountiful as Republicans think.

Sen. Shelley Moore Capito, who is leading Republican negotiations on infrastructure, is scheduled to reconnect with Biden on Friday. A Republican source familiar with talks told ABC News that Republicans expect to make a counteroffer during the Friday meeting.

Psaki on Thursday said discussions between the administration and Republicans are continuing in "good faith" and refused to set a deadline for talks, but the Monday deadline for progress set by Transportation Secretary Pete Buttigieg this past Sunday is drawing near.

The back and forth over infrastructure has gone on for weeks now, with top-line figures for both parties eking gradually toward one another.

The most recent Republican offer proposed $928 billion in infrastructure spending, but included only about $250 billion in new spending over what would have already been federally authorized to address infrastructure.

The newest White House offer of $1 trillion is entirely new money. The sizable cost difference between the packages is, in part, due to fundamental disagreements about the scope of the bill.

Republicans have argued that things like child care, home care, work training and other "human infrastructure" elements of the White House package have no place in an infrastructure bill. A source familiar with negotiations said that the new Biden proposal decreases spending on some of the things Republicans have objected to, such as caregiving, electric vehicles and construction costs for schools and homes, but the difference in cost is still significant.

Senate Minority Leader Mitch McConnell deputized Capito to lead negotiations on behalf of Republicans, but his hand in the back and forth is clear. McConnell has for weeks been advocating for a narrowly tailored infrastructure package that drops off any human infrastructure-related proposals.

In Kentucky on Thursday, McConnell said he spoke to Capito before and after her meeting at the White House, and that he issued a warning on tax hikes.

"Once you get into this tax increase area you're going to create an enormous amount of controversy," McConnell said. "So I don't think that's going to appeal to members of my party and I think it'll be a hard sell to the Democrats."

McConnell forecasted that if bipartisan talks crumble in coming days, he expects Democrats to go it alone, crafting a multi-trillion dollar package and attempting to use reconciliation, a procedural tool to pass it that could allow them to bypass minority opposition, to pass it. But McConnell warned that doing so "would be extremely controversial because of the taxes they want to make a part of it."

Biden threads a difficult needle as he continues to make concessions to appease Republicans. He can only afford to lose four Democratic votes in the House, and as he trims Democratic priorities from the bill to satisfy Republicans, he risks losing the most progressive members of his own caucus in the House.

New York Rep. Jamaal Bowman, a freshman progressive who is among the most liberal Democrats in the House, responded to reports of Biden seeking to compromise with Republicans on infrastructure by threatening to oppose any future agreement.

"If what I'm reading is true, I would have a very hard time voting yes on this bill. $2 trillion was already the compromise.@POTUS can't expect us to vote for an infrastructure deal dictated by the Republican Party," Bowman tweeted Thursday.

The White House has previously signaled its willingness to attempt to pass a second bill that includes some of the more controversial elements of Biden's infrastructure package using reconciliation, but doing so would require the support of all 50 Democrats in the Senate and right now, at least two Democrats, Sens. Joe Manchin and Kyrsten Sinema, oppose using the procedural work around.

Manchin has also been clear he doesn't support a 28% corporate tax rate, though Psaki said Thursday Biden's not prepared to fully abandon his efforts to raise the corporate tax.

It's not clear precisely how Biden might move forward if bipartisan talks falter but Psaki added that Biden maintains his belief that corporations should pay a larger sum on infrastructure.

She stressed that the president has "absolutely not" abandoned his larger goal of raising the corporate tax rate and is only willing to take it off the table for this set of negotiations to entice Republicans.