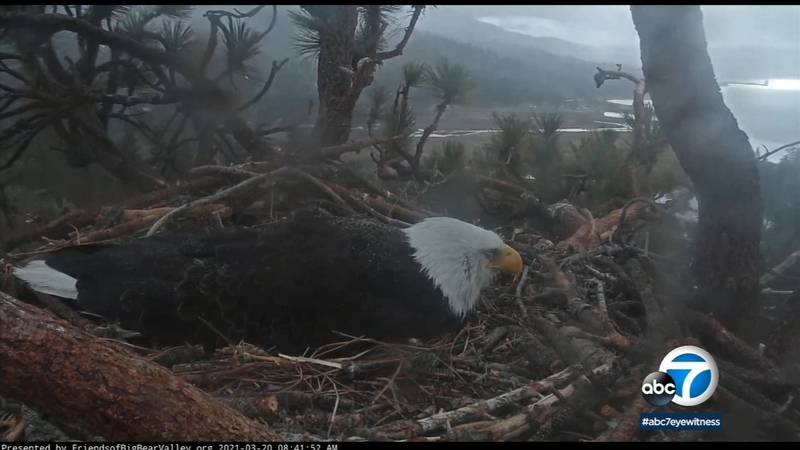 BIG BEAR, Calif. (KABC) -- With the eyes of the world focused on the two eggs in the nest of Jackie and Shadow, Big Bear's beloved bald eagles, an expert discussed the hatching process in an interview with ABC7 on Saturday.

Unfortunately, one of the eaglets apparently has stopped moving after chirping was heard and cracks were seen in its egg during a video livestream on Friday afternoon.

The two adult eagles continued to care for the second egg on Saturday morning as fans remained hopeful that it would hatch successfully.

Sandy Steers, the executive director of the group Friends of Big Bear Valley, which maintains a live video feed of the nest, spoke with ABC7.

Sandy, thanks for joining us.

You're welcome. Thank you for having me.

A pair of beloved and highly-watched bald eagles in Big Bear Valley was spotted shielding their precious eggs from snow amid a blast of cold weather that hit the region.

It does look like we may have lost one of the hatchlings. Is that pretty common? What is the mortality rate for the eagle eggs?

Sadly, eagles in general, only 50% make it to their first year. And so, it's not unusual for hatchlings to not make it. And that's true of all raptors -- and some other birds as well. So, it's part of nature.

We don't really know. I mean, it's possible that it did. There's all kinds of things that are possible that happened, and we can't really tell. There's no way to do an autopsy or anything of the chick.

Watching the camera, one thing that's fascinating is mom and dad kind of do equal chores in taking care of the eggs. Is that right?

Yes, they do, they trade off very equally -- except that Jackie won't let Shadow sit on the nest at night.

Wow, that's funny. Why is that? Is there some interesting reason for that?

No -- well, it's just the way she's always done it. And I think, you know, she wants to be there and ready and he's the guard. He roosts on a tree nearby, so, in case she ever needs anything, he's nearby and can come in.

That's great. How many eagles do you think you have around the Big Bear area now? They've made such a huge comeback.

This actually is the only pair we have year-round, And the others are just visiting eagles that come in from other areas of the country, but they nest elsewhere. This is the only pair that is always here.

This eaglet watch has garnered so much attention. Why do you think that is? Why are people so interested?

"People are looking for things to be excited about. Plus, I think nature is fascinating and in this case they get to see it up close and personal. So they're getting personally attached. Some people tell us they feel like they're part of the family.