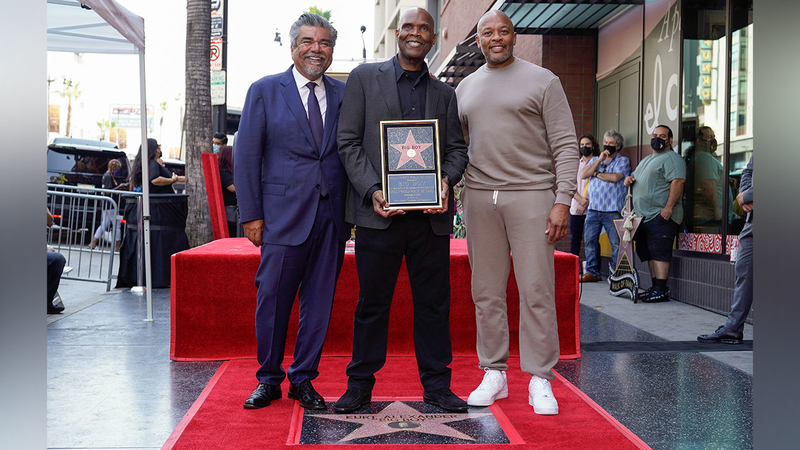 HOLLYWOOD, LOS ANGELES (KABC) -- It's Big Boy's big day! The iconic L.A. radio personality was honored with his very own star on the Hollywood Walk of Fame.

After nearly three decades in radio, Kurt "Big Boy" Alexander got his own Hollywood star on Wednesday - which is also his 52nd birthday!

He's currently on Real 92.3 but used to be on POWER 106. The beloved DJ's radio show, "Big Boy's Neighborhood," is one of the highest rated radio shows in L.A.

"I admire Big as a pioneer of radio but also a friend, and only Big Boy knows how to control the airwaves for the hip hop community here in Los Angeles and the world...Big Boy is hip hop. Big Boy is hip hop culture, representing the West Coast and worldwide," Dr. Dre said.

"Big, I love you. I love you for breaking barriers in radio, entertainment, and as a Black man, I love your support and everything you've done for me and my career. Nobody deserves this honor better than you. Thank you for making me and the entire city of Los Angeles laugh, what's more important than that?" the rap icon added.

Comedian George Lopez also shared his love of Big Boy from the ceremony podium, saying the DJ's "commitment to the Latino community has been there all of the 27 years he's been on the air."

Lopez went on to say that Big Boy "has been in my corner during some of the most difficult times....and Big never wavered in his friendship."

The comedian admitted he's been invited to several star ceremonies in the past, but "I've never been asked to speak for someone that I consider family."

Later in the ceremony, Hollywood Chamber of Commerce officials declared Wednesday "Big Boy Day" before introducing Big Boy himself to the podium to speak.

Big Boy recalled a time in the past when he and his friends would visit Hollywood, but had to walk all the way back home to West L.A. because they didn't have enough money to ride the bus.

"I'm from this turf. I'm from Los Angeles. And to have a day like this is unbelievable," he said. "I have an amazing family, and I had a very amazing mother. We weren't rich in like money, but we were billionaires when it came to love. And for me to sit here in front of my family today and they see their little brother Kurt getting this award, it's amazing."

He thanked his wife and his children for being his strong support system.

"I hope that you guys understand how honored I am to have you guys as my kids and as my family," he said, wiping away tears. He also reflected on how his late mother instilled in him the importance of putting family first. Big Boy then called out his siblings, nieces and nephews, telling them he loved them all.

Big Boy also gave much credit to those who work with him to make his radio show possible, saying there are "so many people that made Big Boy, Big Boy."

He told Eyewitness News that the whole star ceremony seemed like a dream.

Big Boy is the 2,701st recipient on the Hollywood Walk of Fame. He got the nickname because he used to weigh more than 400 pounds. He underwent duodenal switch surgery in 2003, leading to a weight loss of more than 250 pounds. The weight loss inspired the title of his 2011 autobiography, "An XL Life: Staying Big at Half the Size.''

"I am just getting started!" Actor and host Terry Crews celebrated his 53rd birthday by seeing his star unveiled on the Hollywood Walk of Fame. HIs biggest fan was there: his 94-year-old grandmother.