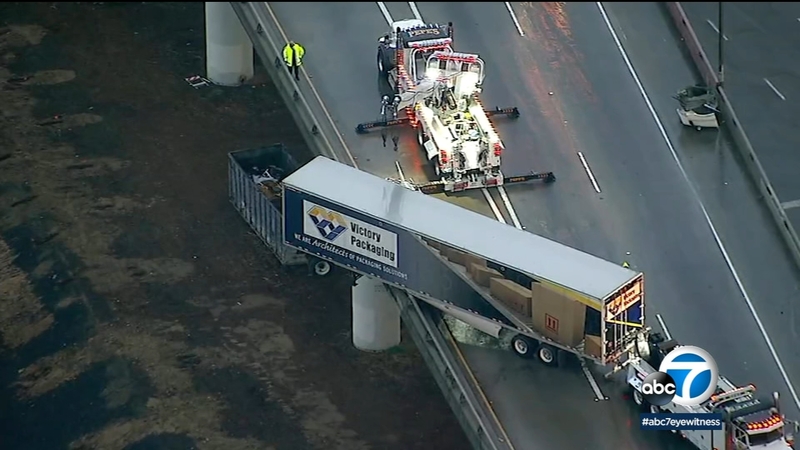 A second round of rain in less than a week made for a wet and wild commute across Southern California Wednesday morning, especially for the driver of a big rig that jackknifed and was left dangling off a bridge.

Part of a 30,000-pound semi truck was hanging off the northbound 710 Freeway connector to the 60 Freeway in East Los Angeles for several hours, causing multi-mile backups.

A Sigalert was issued for the area at about 4:26 a.m. after the tractor trailer was reported to be dangling over the side of the bridge, according to the California Highway Patrol.
Three heavy tows removed the jackknifed truck, which was teetering above an embankment.

The driver was taken to an area hospital after suffering moderate injuries to his face during the impact, officials said.

Further details regarding how the accident occurred were not available.

The big rig was towed away later in the morning, but the connector remained closed due to secondary issues including damage to the bridge's guardrail and a downed light pole.

Two big rigs also crashed on the southbound 5 Freeway near the Roxford Street exit in Sylmar around 3:40 a.m., according to CHP.

Traffic was snarled for several hours, making the commute into the San Fernando Valley more difficult than usual.