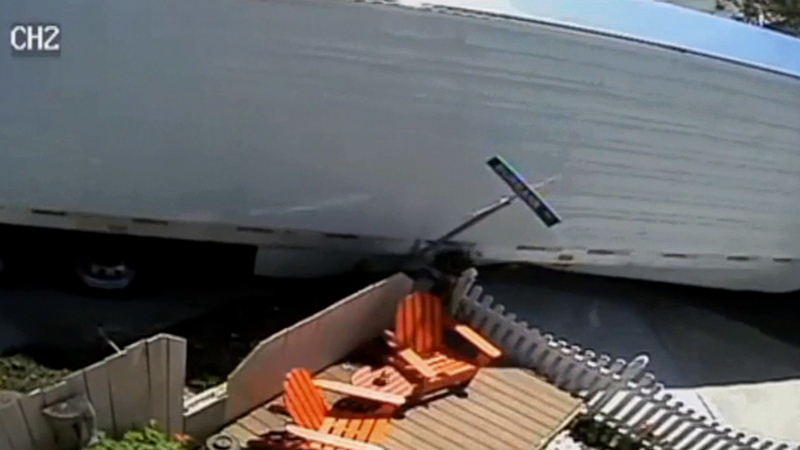 OXNARD, Calif. (KABC) -- Surveillance cameras captured two big rigs crashing into the front yard of an Oxnard home and then taking off. Residents are now hoping city officials will take action before someone gets seriously injured.

The homeowners had just finished repairing the damage from the first hit-and-run when it happened again.

"It's pretty shocking if you see the video. More wild is the fact the guy just took off," said homeowner Keith Crownover.

The Crownovers put the cameras on the home they own as a vacation rental to keep an eye on the property. They never thought they would capture not one, but two, hit-and-run truck drivers.

"It was just shocking. I couldn't believe someone would drive through my yard like that. And then when it happened again, my neighbor called me and told me about it, and I thought he was joking," said Debra Crownover.

The first incident happened Jan. 29. The driver took out everything in his path and kept on going. The tenant in the house chased him down.

The second incident happened almost four months later. Once again, the truck crashed into everything that had been rebuilt on the front yard. Neighbors chased down both hit-and-run drivers, who were arrested.

"To me, it was a message to say, 'Hey...we have to tell somebody we got a problem here,'" said Keith Crownover.

Semis are a common and unwelcome sight on the tiny streets in the Silver Strand neighborhood, which is tucked away near the port and naval base. There are lots of trucks coming and going and missing the proper turns. Residents have been trying to get officials to put up larger signs, but to no avail.

"All we're asking for is to get some signage up there. And that's what I was pushing for before. That's all we really wanted -- something with flashing lights letting them know that there is no truck turnaround down here," said neighbor Mike Zimmerman.

Given the daily caravan of trucks through the area, the Crownovers fear the next incident may end in more than just damage.

"Besides being a pain in the neck for me, ruining the yard, we're worried about somebody getting hurt or killed," said Keith Crownover.