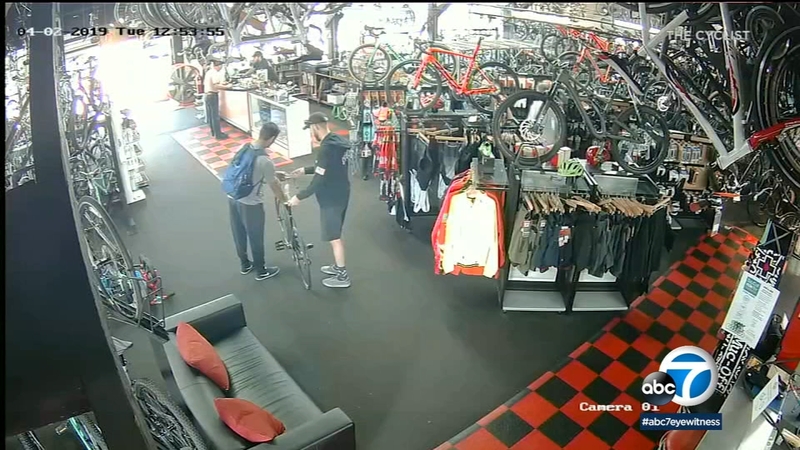 COSTA MESA, Calif (KABC) -- A man walks into a bicycle shop and pedals out on the most expensive bike. The only problem, he didn't pay for it. The owners thought it was gone for good and then the phone rang.

It was a phone call they wished for, but never expected.

"The person who stole the bike was on the phone and wanted to speak with us," said Anthony Karambellas, general manager of The Cyclist.

On the other line was 42-year-old Paul Verdugo Jr. Surveillance video from the previous week at The Cyclist in Costa Mesa shows Verdugo coming in to test the most expensive ride in the shop, then he takes off, but his image sticks around - and not just on Eyewitness News.

"This story has gone nationwide and across the pond and everywhere he goes he saw his face on TV," Karambellas said.

Shop CEO John Macroni says a man wanting to remain anonymous gets the one thousand dollar reward for identifying the suspect.
After a half hour on the phone, Verdugo agrees to take a Lyft back to the shop with the bike.

The bike is no longer worth five thousand dollars, but "it pedals, we're thrilled that it's in good a condition as it is," said Karambellas.

Staff at The Cyclist say they are grateful to everyone who helped get the word out and get the bike back to the shop, but say without the help of the security cameras they wouldn't have known what suspect the were looking for.